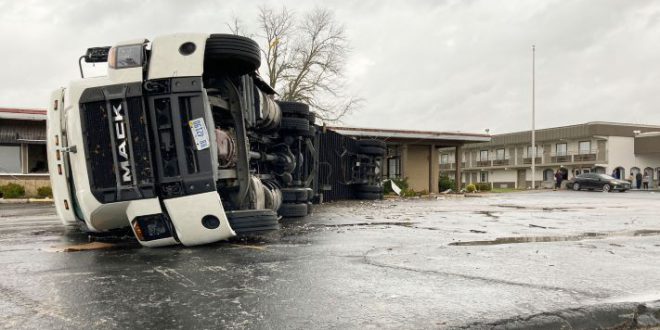 A lorry is flipped over and pushed against a building in Bowling Green, Kentucky. Pic: AP

Seven central and southern US states were searching for survivors and surveying the devastation Saturday after a series of powerful tornadoes intensified by severe storms ripped across the region, leaving an estimated 70 to 100 people dead.

By early evening, officials had confirmed 29 deaths, including 22 in three Kentucky counties, many of those in a candle factory in Mayfield that had around 110 employees working the night shift when a tornado roared through.

President Joe Biden declared a state of emergency in Kentucky, the state hardest hit when one of four tornadoes, including a massive storm, devastated Mayfield, a small town 134 miles (215 km) north-west of Nashville, Tennessee. A candle factory partially collapsed when the tornado struck on Friday evening.

Multiple tornadoes pummeled a 200-mile plus area in what US President Joe Biden described as an “unimaginable tragedy”.

“This has been the most devastating tornado event in our state’s history,” Kentucky Governor Andy Beshear said at a news conference. He said he thought “at least dozens” of workers at the candle factory were killed when the roof collapsed.

“The level of devastation is unlike anything that I have ever seen,” Beshear said. “We were pretty sure that we would lose over 50 Kentuckians, I’m now certain that that number is north of 70. It may, in fact, end up exceeding 100 before the day is done.”

Sarah Burgess, a trooper with the Kentucky state police, said that “the entire building is essentially leveled”. Trooper Burgess later added that she could not tabulate the number of fatalities as search and rescue teams were going through the rubble.

There were around 110 workers in the factory – Mayfield Consumer Products – when the tornado struck. Mayfield mayor Kathy Stewart O’Nan said the candle factory “looks as if a bomb has dropped on it”.

“We hope there are still rescues to be made. We fear that it is now just recovery,” O’Nan added.

At a late afternoon news conference, Biden said the loss from the tornado strikes in Kentucky and neighboring states was “profound” and a “tragedy”, and the estimated 22 tornados that touched down “likely to be one of the largest tornado outbreaks in our history”.

“We still don’t know how many lives were lost or the full extent of the damage,” he said. “I say to all the victims you’re in our prayers, and to the first responders and emergency personnel, this is the right thing to do at the right time. We’re going to get through this.” Biden said federal aid agencies, including Fema, “would focus on getting support to where it is needed”.

Images posted on social media showed the deadly but erratic nature of tornadoes, with buildings, vehicles and trees torn apart on one street, then a neighboring street left relatively unscathed.

“Absolutely catastrophic damage in Mayfield,” tweeted Whitney Westerfield, a state senator, where police announced at 7pm local time curfew for Saturday night. “Gentleman at the roadblock said that his house was fine, but his next-door neighbor’s house was completely gone.”

Other structures that were badly damaged include an Amazon facility in Illinois, where six died, officials said, and a nursing home in Arkansas.

About 30 people who were in the Amazon facility in Edwardsville, Illinois, were taken to the police station for evaluation. “This is a devastating tragedy for our Amazon family and our focus is on supporting our employees and partners,” Amazon spokesperson Richard Rocha said in a written statement.

The weather system that passed over the region was intensified when cold air from the Plains met unusually warm air from the south.

Most of the devastation occurred on the “warm” side of the storm, and at least one of the four recorded tornadoes may have been on the ground for 100 miles (160 km).

“To lose a loved one in a storm like this is an unimaginable tragedy,” Biden said in a statement, adding that the federal government was working with regional governors “to ensure they have what they need as the search for survivors and damage assessments continue”.

Still, the scale of the damage from the system, coming after a series of recent climate-crisis intensified “weather events” across the US, caught many by surprise. Some 12 hours after the storm – named Atticus by the Weather Channel – struck, 500,000 homes and businesses across eight states were without power.

“There were tons of vehicles just thrown like toys,” said channel meteorologist Chris Bruin, noting that tractor dealerships were destroyed and semis blown over along the highway.