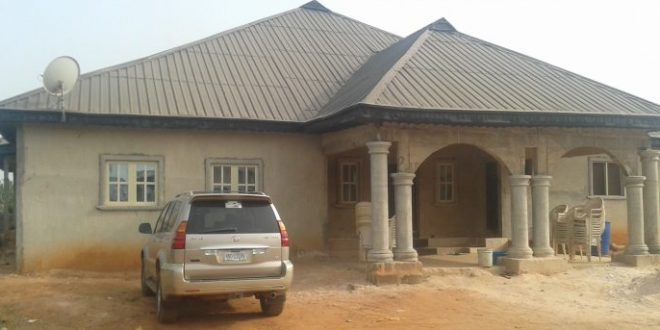 The residence of the late police officer

An Assistant Commissioner of Police, identified as one Christopher Osakue, has reportedly committed suicide in Benin, the Edo State capital.

It was gathered that the late Osakue allegedly shot himself in the head with his service pistol in his residence located on Upper Sokponba on Wednesday.

The deceased was said to have sent a woman and a little boy, said to be living with him, on an errand before killing himself.

It was also learnt that he did not leave any suicide note behind.

The late police officer was said to be in charge of training and development at the state police command after his recent posting from Ondo State.‎‎

It was gathered that the ACP had earlier suffered a partial stroke a few years back and was gradually recovering from it before the incident occurred.

A source in the area disclosed that a gunshot from the residence of the deceased was heard at about 5pm on December 28.‎‎

The source said, “A neighbour said she heard a gunshot inside the ACP’s residence about 5pm that fateful Wednesday.

“She added that after the sound of the gun, a frightening silence engulfed the entire building.”

Security operatives from the Ugbekun police division were said to have later stormed his residence.

It was further learnt that the late Osakue had played host to some youths in his area last Christmas.

The Commissioner of Police, Haliru Gwandu, described the senior police officer’s death as a case of suicide.

Gwandu also explained that the pistol which he allegedly used to commit the act was signed for at the Ondo State Police command before he was posted to Edo.