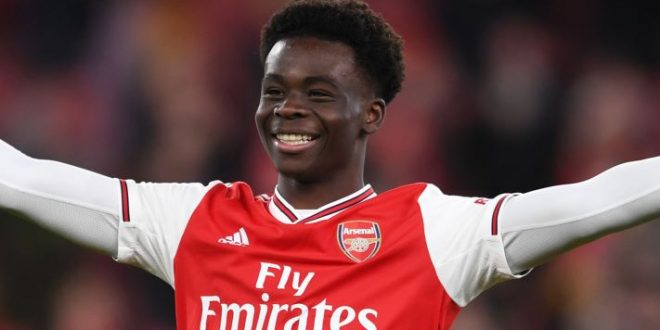 Arsenal’s left-back Bukayo Saka, 19, who only made his England Under-21 debut last month has been invited to England’ senior national team thereby forestalling his being invited to play for the Nigerian Super Eagles.

Saka, who was born in England to Nigerian parents has accepted the invitation for this month’s matches against Wales, Belgium and Denmark.

In a tweet, Saka indicated an interest in accepting the invitation to play for the Three Lions, putting to rest the expectation that he may feature for Nigeria.

Honoured and grateful to get my first @england call up ! #Blessings 💫 pic.twitter.com/YD3kx68y5L

However, until he plays an official game match for England he is still eligible to switch his allegiance to Nigeria.

Mason Greenwood and Phil Foden, who were sent home from Iceland last month after breaching coronavirus quarantine guidelines, have been left out.

But Harry Maguire, who was withdrawn from that squad while he faced a court case in Greece, is in the 30-man squad.

Manchester United captain Maguire, 27, was given a suspended prison sentence on the Greek island of Syros after being found guilty of aggravated assault, resisting arrest and repeated attempts of bribery.

The centre-back maintains his innocence and has appealed against the decision, which nullifies the conviction.

England play Wales in a friendly on 8 October, before Nations League fixtures against Belgium and Denmark on 11 and 14 October respectively, with all three games being played at Wembley Stadium.

Calvert-Lewin is awarded his first call-up by Gareth Southgate after scoring eight goals in five appearances in all competitions so far this season, including two hat-tricks.

“I’m a very, very proud man to get this first England call,” said the 23-year-old.

“I phoned my mum and my dad, and my mum burst into tears.

“It’s something we’ve spoken about since I was a young boy. To get here now and get the call-up is a dream come true. I’m very happy.”

Southgate said: “Dominic is a player whose all-round game we have liked for some time. What he’s added over the last 18 months is goals and for a striker that’s critical.

“He’s in a rich vein of form. He thoroughly deserves his opportunity.”

Gunners left-back Saka, 19, only made his England Under-21s debut last month but Southgate said he had been “impressed” with his progress through the Three Lions’ youth system.

“At times for Arsenal he has been very exciting,” Southgate said. “He is improving all the time – really high potential, really high quality.

“Everyone tells me he is intelligent and a really level-headed boy. It is an area of the pitch we are keen to look at a different profile of player and he can play a number of roles comfortably.”

On 22-year-old Leicester midfielder Barnes, Southgate said: “Harvey has had a good couple of years.

“He is a different sort of attacking wide player, very direct. He was very impressive counter-attacking against Manchester City the other day. That has been a consistency for a period of time.”

Manchester City midfielder Foden and Manchester United forward Greenwood were sent home for mixing outside the enforced “bubble” around Southgate’s squad after making their senior debuts against Iceland earlier on the same day.

At the time, Southgate said the pair had been “naive” and both later apologised for their actions.

They have been omitted from Southgate’s selection for the October camp but the manager says they have now “suffered enough”.

“We have to send a message to all our players at every age level that that sort of thing isn’t how we do things with England,” he said.

“Then we’ve got to rehabilitate these two boys. Young people will make mistakes. These lads have suffered enough now.

“I think they need this period of reflection but that gives them the opportunity to get back on their feet with their clubs, enjoy their football again.

“I can speak to them after this camp and it will be just be about their form then.” 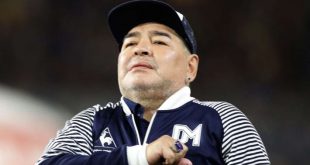