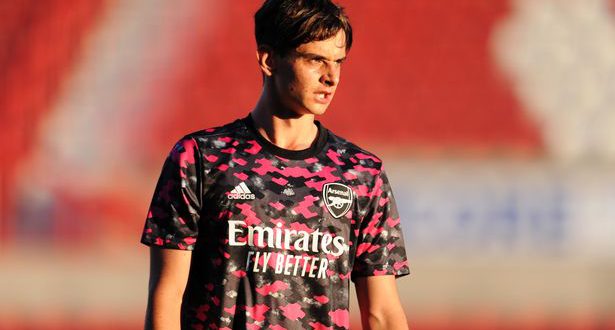 The next prodigious talent to come out of Arsenal’s Hale End could make his professional debut against AFC Wimbledon this week.

Charlie Patino has been tipped to be “better than Jack Wilshire” and has earned comparisons to Phil Foden.

Now, the 17-year-old might be set to make his debut in the League Cup this week as the Gunners line up against AFC Wimbledon.

Premier League teams get their League Cup campaign off to a start this week, with Arsenal hoping for no upsets as they welcome Wimbledon to the Emirates.

Patino’s inclusion is expected amidst a raft of changes to the starting XI.

The youngster has recently impressed for the Gunners’ U23 side including scoring a brilliant solo goal against Manchester United U23s and has trained with the first team regularly.

He even took part in a behind closed doors friendly against Brentford.

Arsenal scout Brian Stapleton said: “Sean O’Connor discovered Jack Wilshere and he said to me that Charlie is the best player who has ever walked through the doors at Hale End.

“The kid has got so much potential, but he’s not there yet.”

Instead of sending the youngster out on loan, it’s believed Arsenal preferred to keep him at the club to develop into a first team player as Manchester City did with Phil Foden.

Patino didn’t travel with the first team to Scotland on their pre-season trip but is expected to force his way into Arteta’s thinking sooner rather than later.

Stapleton added: “Charlie has an amazing awareness of where he is on the pitch and where other players are on the pitch. His vision is so good, he can split a defence with a pass.

“And he has that desire to do well. When he’s on that pitch he can be an animal, he’s a winner.”

Patino had received offers from a number of top clubs but opted to join Arsenal ahead of Tottenham, Chelsea, and Manchester City.

Arsenal reportedly paid £10,000 in compensation to Luton for the youngster who has since risen through their ranks.

His father Julio explained to the Luton Herald & Post at the time: “Opportunities like this don’t come too often so you’ve got to take them and we’re absolutely delighted for him.

“When clubs like Arsenal, Chelsea, Man City, Tottenham, come knocking on your door, there’s a reason behind it and you can’t just say ‘no thanks, I’m quite happy where I am.’

“Luton Town didn’t want to lose Charlie, they absolutely love him there, but they realised for him to develop further he needs to move on.”

The Sun reported that some Arsenal insiders said he was better than Jack Wilshire at 16 and on a Reddit Q&A , Football.London’s Chris Wheatley said: “Charlie Patino is the next big thing at Arsenal and I am certain he will become a regular for the club in a few year’s time.”

Patino would look to follow in the footsteps of Hale End graduates Emile Smith-Rowe and Bukayo Saka.

Charles Igbinidu is a Public Relations practitioner in Lagos, Nigeria
@https://twitter.com/ionigeria
Previous Woman throws her own divorce party after being finally free of 17 years of marriage
Next British footballer caught ‘having sex on private jet’ by flight attendant