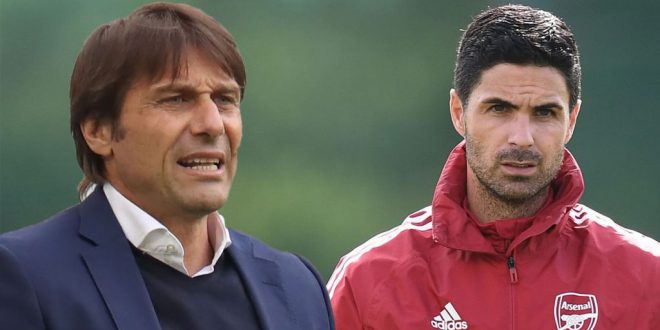 Darren Bent thinks Arsenal have to sack Mikel Arteta immediately if they are to have any chance of bringing in Antonio Conte.

The ex-Chelsea boss is out of work at the moment after leading Inter Milan to the Serie A title last season.

But the Italian won’t be short on job offers so the Gunners need to make their move soon, according to the ex-England and Spurs striker.

Speaking on talkSPORT, Bent said: “We know Antonio Conte is out there.

“If Arsenal had any kind of hopes of attracting him or getting him to the club then you would say get rid of Arteta now and get Conte in.”

Despite Bent’s plea to the Gunners hierarchy to axe Arteta, he admitted that getting Conte to the Emirates could be a long shot.

Bent added: “I don’t think that’s possible but, unfortunately, if you get rid of him now, where do you turn?”

It’s been a turbulent few weeks in the Arsenal dug out for Arteta, who’s led the club to two defeats in as many games at the start of the Premier League season.

First, the Gunners were embarrassed in a 2-0 defeat to Prem new boys Brentford.

Then they lost 2-0 to Chelsea which was the icing on the cake for Arsenal fans who furiously surrounded the Gunners boss’ car after the game urging him to quit.

And it was during their loss to the Blues that Bent feels confirmed the need for the Spaniard’s exit as he looked broken.

Bent said: “There was an image of Arteta slumped in his chair just with his head down and to me he looked like a broken man.”