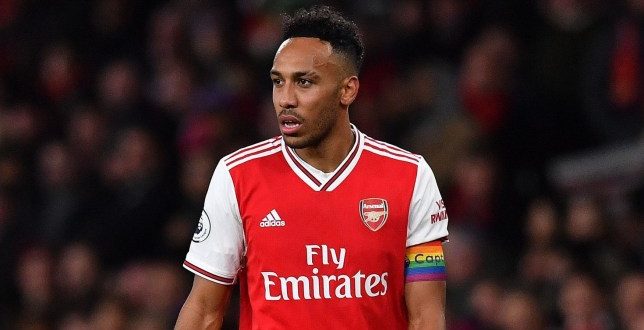 Arsenal captain Pierre-Emerick Aubameyang was dropped for disciplinary reasons for the clash with Southampton.

Alexandre Lacazette captained an unchanged side, with Aubameyang not even among the substitutes as Emile Smith Rowe – still short of full fitness – returned on the bench.

In a pre-match interview shared on the club’s Twitter feed, manager Mikel Arteta said of Aubameyang’s absence: “Unfortunately (it is) due to a disciplinary breach. We’ve been very consistent, no negotiables, and he’s not involved today.”

Asked if it could be a longer-term ban, he added: “It starts today. It’s not an easy situation, a situation we want, to have our club captain in that situation.”

The hosts doubled their advantage six minutes later when Martin Odegaard scored his third goal in as many Premier League matches before Gabriel Magalhaes, who was denied a goal by VAR moments earlier, capped a good afternoon on the field for Arsenal.

Victory sees Arsenal put back-to-back defeats to Manchester United and Everton behind them to move up to fifth ahead of an important clash with West Ham at the Emirates on Wednesday evening.

Meanwhile, Southampton, who are without a win in five league matches, stay 16th.

Arsenal made a sluggish start and they needed Aaron Ramsdale in the early stages as Southampton threatened the opener.

The Gunners’ attempts to play out from the back weren’t working as the visitors continually won possession high up the field. Nathan Tella’s weak effort was easily saved by Ramsdale before Stuart Armstrong saw a strike from outside the penalty area deflected over the crossbar.

Ramsdale needed to be alert to keep out another Armstrong shot before Arsenal sprang into life.

The Gunners eventually got one of their attempts to play out from the back right to devastating effect. Stand-in skipper Lacazette swept home Bukayo Saka’s low cross to finish an impressive counter-attack from the home side.

Man of the match: Aaron Ramsdale.

The lead was quickly doubled when Odegaard continued his fine form in front of goal, nodding home after Kieran Tierney had looped a header back into the danger area.

Southampton now appeared vulnerable whenever Arsenal pressed forward and the home side had chances to add to their lead before the break, particularly when Lacazette was halted by Kyle Walker-Peters’ last-ditch tackle.

The third goal eventually came in the 62nd minute when Gabriel headed home from Gabriel Martinelli’s corner, three minutes after the Gunners defender had an effort ruled out for offside.

Martinelli and Saka both hit the woodwork and Willy Caballero saved well from Takehiro Tomiyasu as Arsenal threatened to overwhelm the visitors, while Ramsdale continued his fine form with smart stops to deny Nathan Redmond and Tella and keep his clean sheet intact.

What the managers said…

Arsenal boss Mikel Arteta: “I’m very pleased. After a difficult period, we had two defeats where I don’t think we deserved to lose the games, but we did.

“We started the game a little bit nervy, you could tell that we were carrying that feeling still, but we finished strong.”

On the first goal: “It was [a ‘piece of art’] – that’s our identity, the way we want to play, it’s not possible to score all the goals like that. But that’s the direction we want to take.

“I am very happy. It’s a contribution from the whole game, what is required in every moment and then the execution and that’s what we’ve been lacking a little bit, because the intention is there, it’s just doing it more consistently.

“You could see that the team wanted to keep attacking, hit the post twice, a goal disallowed.”

Southampton boss Ralph Hasenhuttl: “I think the signs before the game weren’t the best with players out with injuries. We tried in the beginning to be brave and play well. We concede in the first 15 minutes with their first chance. You could see the quality they had.

Man of the match – Aaron Ramsdale

In a 3-0 win, the goalkeeper may be a strange choice for man of the match, but Aaron Ramsdale continued his fine form this season for the Gunners with a number of fine stops in what were tricky conditions in north London.

The rain poured down for most of the game and in greasy conditions the England goalkeeper didn’t put a foot wrong.

A number of his saves came at crucial times, especially in the opening 20 minutes when Arsenal were struggling to contain Southampton.

Later in the game, Ramsdale made some more spectacular saves as he secured an eighth clean sheet in 12 Premier League matches.

Arsenal are unbeaten across their last 27 home matches against Southampton in the top-flight, their joint-longest such run against any opponent (also against Manchester City between 1976 and 2012, and 27 against Fulham – ongoing).

Southampton have never won in 23 Premier League away games against Arsenal (D7 L16) – it’s the most one side has faced another on the road without ever winning in the competition’s history.

Martin Odegaard has scored in each of his last three Premier League appearances for Arsenal (seven shots), having scored only twice in his first 25 appearances for the club in the competition (21 shots).

Bukayo Saka has assisted 22 goals in all competitions for Arsenal since the start of the 2019-20 campaign, four more than any other player for the club.