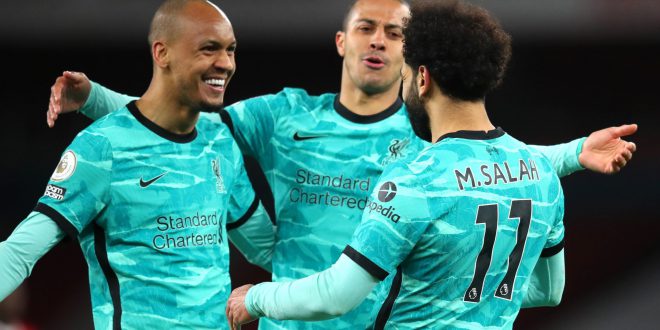 Three second-half goals, including two from sub Diogo Jota, strengthened Liverpool’s top-four hopes with a dominant 3-0 win over a tamed Arsenal at the Emirates.

James Milner missed the best chance of a dominant but goalless first half for Liverpool, with a shot-shy Arsenal, who Sky Sports’ Gary Neville described as “shabby” throughout a poor performance, keeping them out but registering just one attempt on goal.

Speaking at the end of the match Liverpool boss Jurgen Klopp said: “As a package, it was a good performance. We finished our situations off. Arsenal were not really in the game for the whole 95 minutes. That was down to us.

“We had to keep going and keep the momentum, We had to be careful with it and treat it well. I wasn’t frustrated at half-time. We had to work hard and when you do that you have a good chance of winning.

“We’re obviously not in dreamland this year. When people talk about you in the wrong way, you want to react. It was a sensational cross by Trent for the goal.”