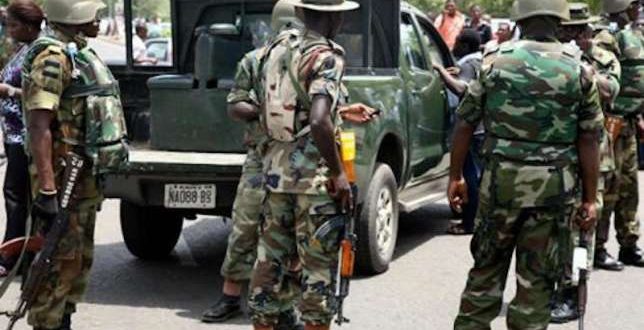 The police in Lagos have arrested a soldier, Lance Corporal Shedrack Christopher for allegedly stealing two mobile phones at a hotel in Ijanikin.

Christopher was arrested on March 19, around 6am at Express View Hotel following complaints from the management of the facility on the alleged theft.

Parading the suspect Wednesday, Police Commissioner Zubairu Muazu said he stole two mobile phones worth N86,000 from the bar and hotel, adding that the phones, an axe, a cutlass and knife were recovered from the suspect.

“We also recovered Nigerian Army Warrant Card, a Honda accord car with registration number Lagos SMK846 and army uniform. He confessed to have deserted from the Nigerian Army in 2017 at Maiduguri that he participated in killings at Igando Lagos and Edo State in 2017 after deserting the army. We have written the military to verify his claims and are awaiting response on.”

But Christopher denied he was a dismissed soldier, refuting police claim that he confessed to being a cultist.

The suspect also denied stealing the phones, insisting that he only took them from the bar where he saw them for safekeeping.

“I did not steal the phones. I went to the hotel to meet my friend who lodged there. I got into the hotel around 11pm and as I was walking in, I saw two phones at the bar. There was no one there and so, I took the phones and kept them in case the owners looked for them.

“I did not steal the phones. My plan was to return them once anyone started looking for them. I am still a soldier. I have not been dismissed and I am not a cultist. I never admitted to killing anyone.

“The dagger was what I used in Maiduguri. I collected the cutlass from a group of boys who were fighting and put it inside my car. I collected the axe from hoodlums under the Mile Two Bridge.

“The police people at Ijanikin Division tortured me. They said they’ll use the knife to cut my ear. They beat me but still I did not admit to any of those things they are claiming.”

The suspect whose Driver’s license had another name from his army identity card, said he changed his name to Shedrack John when he joined the military.

He said he stayed back in Lagos and was engaged in frozen turkey smuggling from Benin Republic into Lagos in order to feed his family.