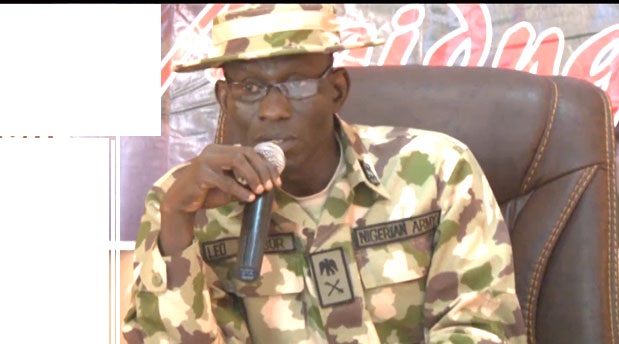 The Nigerian Army said on Sunday that it had commenced large scale operations to smoke out Boko Haram terrorists from their Sambisa forest hideout in Borno.

“I want to inform you that troops of the Operation Lafiya Dole are conducting operations in the heart of Sambisa as we speak.

“The troops are deep into the forest to smoke out Boko Haram terrorists,” Irabor said.

He said that the troops were led by the General Officer Commanding (GOC) 7 division of the Nigerian Army Maiduguri Brig.-Gen. Victor Ezugwu.

“In fact the GOC 7 division is leading the operations,” Irabor said declining to give further details.

He said that the troops had also recorded tremendous successes against the terrorists in the last couple of days.

“Following a tip-off, troops intercepted four female suicide bombers approaching from Sambisa in the general area of Jimini-Bolari village. Two unexploded Improvised Explosive Devices on the suicide bombers were safely detonated by our own team.

“Also, a suspected terrorists training camp at Mudallah llage in Dikwa Local Government Area was raided by troops on April 16.

“Consequently, troops made contact and killed a suspected terrorists leader and six others while capturing five of them, during the raid, five vehicles and several terrorists flags were destroyed.”

Irabor said that the troops also rescued over 1,000 civilians held captive by the terrorists.

He said on April 3, troops also launched a fighting patrol to Boboshe, Garna, Kyare, Ginba and Ajiri villages where they recovered eight industrial gas cylinders and five regular gas cylinders, being used in bomb making, at a primary school.

He said during the operation three terrorists were captured while four motor cycles, three bicycles, a solar panel and two containers of liquid herbicides were destroyed.

In another operation on April 28 troops in the general area of Bogoro, Duguno 1, 2 and 3 encountered and cleared some terrorists elements around Mmbaraka.

“The troops proceeded to Jadda village where they engaged and killed four terrorists. The patrol team also discovered a big pit where the terrorists used for dumping their victims to die and rot.

“During the operation, one of the troops suffered gunshot wound and was evacuated for medical treatment. I am glad to state that he is in stable condition and responding to treatment,” Irabor said.