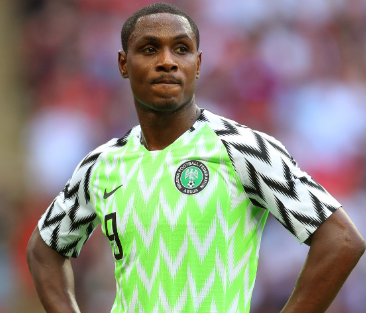 Argentina Vs Nigeria: Odion Ighalo Apologises Says “This is Football…Life Has To Continue”

Ighalo, who missed a couple of chances in the all-important match has apologised to the entire nation and teammates.

He also rued the clear chances he had which he failed to utilise.

“I apologise to Nigeria. I apologise to my team mates,” Ighalo said.“I take responsibility for this game because I had taken those chances I had that would have made it a different ball game now. “But that is football and life has to continue.

The Changchun Yatai’s captain expressed sadness for the ouster of the team from the World Cup.

“It’s a sad day for me, the boys and the country because we went out in a bad manner and we deserved more in the game,” he said.

“We had a penalty in the game and another one which the referee did not give.

“I missed a couple of chances that would have finished the game but that’s football because sometimes you win and sometimes to lose.”

Ighalo, however, stated that he is ready to take whatever criticism that is directed at him for the chance he lost to score the winning goal that would have seen Nigeria defeat Argentina for the first time in the World Cup.

“Nobody criticised me, it’s a teamwork. We are 23 players fighting for a single thing. Even if I am criticised, I’ll take it in good faith,” he said.

“Criticism is part of football because if you are not criticised you won’t do well. I am ready to take any criticism that will come upon me now and life has to go on. And we still have a better day ahead.

“I am very proud of the team today because we put up a good fight from the start to finish.”