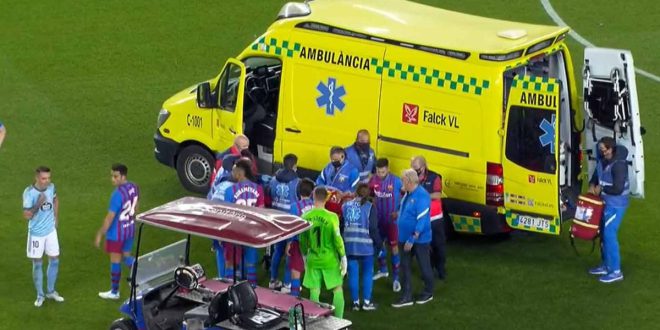 Araujo was taken away by an ambulance (Image: @PremierSportsTV/Twitter)

Barcelona defender Ronald Araujo was taken off the pitch in an ambulance during their victory over Celta Vigo and rushed to hospital.

The Uruguayan was involved in a sickening clash of heads with teammate Gavi in the 62 minute. The two players went to challenge for a looping ball just inside their own half and accidentally collided. While Gavi stayed down, Araujo initially stayed on his feet and ran back to recover before suddenly dropping down to the turf in a worrying incident for the 23-year-old, marring the match.

Fans chanted “U-RU-GUAYO” form the stands following his substitution and a statement from the club read: “Ronald Araujo has suffered a concussion and has been taken to the hospital to undergo further testing.” In his post-match news conference, manager Xavi Hernandez confirmed: “Araujo is conscious, out of danger. [The] doctor tells us not to worry.”

Thankfully for Gavi, the midfielder was able to continue the game. At that stage, Barcelona were leading 3-1 thanks to a goal from Memphis Depay and two from ex-Arsenal captain Pierre-Emerick Aubameyang. Celta’s talisman, Iago Aspas, pulled one back in the second half, but their hopes of salvaging something at the Camp Nou were dashed when Jeison Murillo was sent off.

While the game went on with 11 minutes of added time, the thoughts of all watching on were with Araujo, who has made himself a staple of the Blaugrana’s back line under Xavi. The nine-capped Uruguay international has made 80 senior appearances for Barca after rising through the acclaimed La Masia academy setup.

Araujo was recently been linked with a transfer to Manchester United but has explained why his intention is to stay at Barcelona for years to come, having put pen to paper on a new contract last month, keeping him in Catalonia until 2026.

Araujo added during his presentation at the Camp Nou: “I always work hard. I watch videos and talk a lot with Xavi about learning the Barca style. I believe in the project and we will get back up and start winning trophies again. I want Barca fans to feel excited about the team, because we are going back to the Barca DNA and we have a solid base of young and veteran players. We have a team to dream about.”

President Joan Laporta also heaped praise on him and declared: “We want to thank Araujo for his character and commitment. He has opened his heart. He is a footballer of the immediate present, but this also helps us to consolidate our short- and long-term plans. He is a very talented player who will help us to build a winning Barca.”