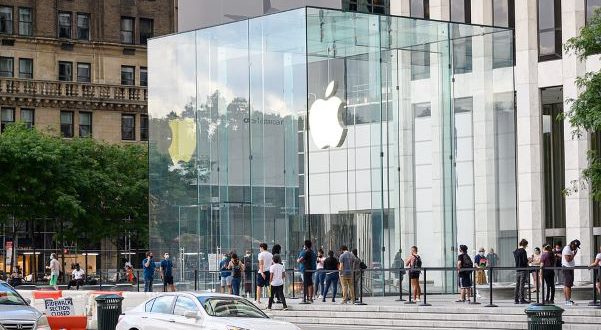 Apple has become the first U.S. company to hit a market value of $3 trillion during intraday trading.

Apple briefly achieved the milestone Monday when its share price reached $182.86, before later closing at $182.01.

The company, which has tripled its valuation in less than four years, showed growth across all of its products during its fourth-quarter earnings, with revenue up 29 percent year-over-year, CNBC reported.

Apple’s services business grew to 25.6 percent over a year-to-year span and delivered more than $18 billion in revenue during the quarter.

Investors have also used Apple as a safe haven during the recent market struggles, due to its strong balance sheet and prodigious cash flow, according to CNBC.

In a Monday note, TFI Asset Management Limited analyst Ming-Chi Kuo said the company sold 27 million pairs of its newest AirPods model over the holiday season, driving in 20 percent over the year growth for Apple’s wearables business during the quarter.

Apple became the first U.S. company to hit a $1 trillion market cap during intraday trading in August 2018 and then the first to reach $2 trillion two years later.