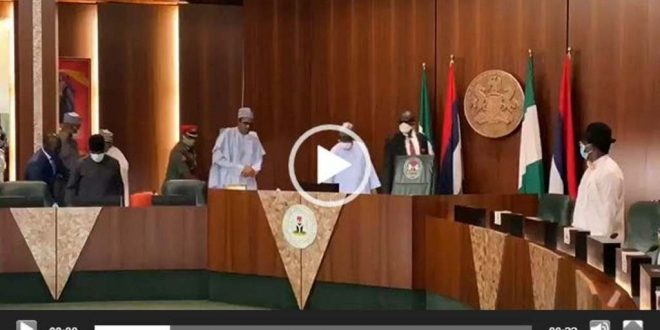 The tenure of the suspended National Chairman of the All Progressive Congress (APC), Adams Oshiomhole has come to an abrupt end as the National Executive Council (NEC) of the Party has dissolved the National Working Committee (NWC).

Governor Buni, who was the former Secretary of the APC was sworn-in by the Attorney General of the Federation, AGF, and Minister of Justice, Abubakar Malami.

President Muhammadu Buhari at the NEC advised that all litigations in the party should stop.

The NEC meeting convened by Victor Giadom whom President Muhammadu Buhari recognised as the acting chairman of the party, also had vice president Yemi Osinbajo in attendance.

Speaking after his emergence as chairman of the caretaker committee, Buni assured APC members of the justice in managing the ongoing crisis in the party.

“As a former 2-term National Secretary, I know the party very well, and it’s all about doing justice to every member of the party,” Buni said. “Without justice there won’t be peace.”

“If you don’t manage crisis obviously crisis will manage you.”