Former Vice-President Atiku Abubakar has described his former party, the All Progressives Congress (APC) as a dying party that never took youth seriously.

In an attempt to explain his reasons for resigning from the APC, Atiku announced on his website on Friday that the ruling party never took the Nigerian youth into account.

He said that the future belonged to young people and that he joined the APC to facilitate a bright future for the young and old.

“The party we put in place has failed and continues to fail our people, especially our young people; how can we have a federal cabinet without even one single youth.

“A party that does not take the youth into account is a dying party.  The future belongs to young people.

“I admit that I and others, who accepted the invitation to join the APC, were eager to make positive changes for our country that we fell for a mirage.

“Can you blame us for wanting to put a speedy end to the sufferings of the masses of our people?’’

Atiku also hinged his resignation on fractionalisation of the APC, resulting from “arbitrariness and unconstitutionality” over the years.

He said it was for the same reason that he defected from the Peoples’ Democratic Party (PDP) in 2014.

“While other parties have purged themselves of the arbitrariness and unconstitutionality that led to fractionalisation, the APC has adopted the same practices.

“It has even gone beyond them to institute a regime of a draconian clampdown on all forms of democracy within the party and the government it produced,” he added.

Atiku said that after due consultations, he had resigned from the APC to take time to ponder his future. 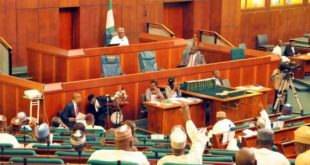 Spread the loveThe House was thrown into a turmoil on Tuesday, while considering a Matter …