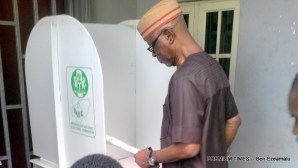 The Alliance for Credible Elections (ACE), an independent election monitoring group on Monday disclosed in Abuja that the September 28, governorship election in Edo state was massively manipulated by the Independent National Electoral Committee (INEC) to favour Mr. Godwin Obaseki of the All Progressive Congress (APC).

Also, another election monitoring group, the Public Interest Association, that also  monitored the governorship election in Edo state, has called for the cancellation of the results, saying that it was a charade and does not reflect the wishes of Edo people.

Speaking at a press conference, in Abuja, on the report of its observation of Edo State governorship election, the acting General Secretary of ACE, Mma Odi, said that the Edo election saw a new innovation in rigging, regretting that the development took the country to the dark days of the military era.

The ACE further stated that the election was rigged scientifically by INEC, at the point of collation.

The group, also described the development as replica of the elections conducted in 2003 and 2007, under the administration of ex-President Olusegun Obasanjo,

It alleged that to perfect this act, the electoral umpire deliberately delayed collation of results of election till 10pm, where the inglorious act was carried out in the night and advised against playing partisan role in its responsibilities.

“This election has brought in new innovations to the rigging of elections. You make the election to appear very nice during voting and all that but when it concerns collating, they were highly innovative. Which means we are getting higher in technological advancement.”

Meanwhile in Benin City, accredited election observers under the aegis of Public Interest Association, that monitored governorship election in the state, has called for the cancellation of the results, saying that it was a charade and does not reflect the wishes of Edo people.

Addressing newsmen in Benin City On Monday, National Coordinator Mrs Esther Bassey, said that the results released by INEC, was an indication of a commission that has become partisan and has compromised itself to avoid an inconclusive exercise.

According to the observers, “We demand for an immediate cancellation of the September 28, 2016 governorship election in Edo State because such charade exercise has already put the peace and unity of the state in jeopardy as the results released by a partisan and compromised INEC does not in any way reflect the wishes of the people of the state.

“The results released shows that INEC was indeed under pressure to avoid further inconclusive elections in Nigeria as many inconclusive elections nowadays have already painted the commission on a negative note before Nigerians, hence the careful allocation of votes to political parties and declaration of a winner without consideration of the peoples’ feeling.”

But reacting to allegation that the Edo governorship election was rigged in favour of APC, the party’s acting Publicity Secretary, Mr Timi Frank, said it was a wild allegation without substance.

He said that the APC won the election as a sign of appreciation for the development of Edo State for the past eight years by the leadership of Governor Adams Oshiomhole.

Speaking on a telephone interview, Mr Frank said that the development in Edo will repeat itself in the forth coming governorship election in Ondo State given that the people of the state were disenchanted with the governance of Governor Segun Mimiko.