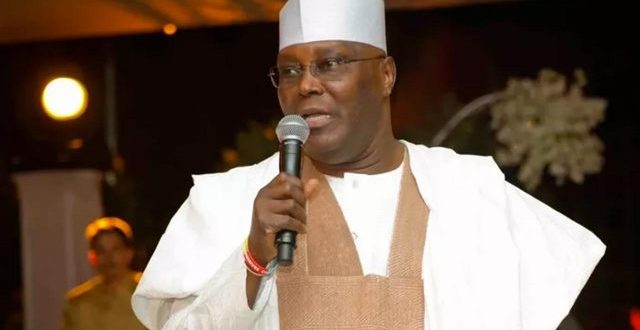 Former Vice President and a leader of the ruling All Progressives Congress (APC), Atiku Abubakar, yesterday decried the absence of internal democracy among the country’s registered political parties.

Making a veiled reference to the way and manner the Chief John Odigie-Oyegun led APC is being administered, he called for a nexus between internal democracy and the quality of leadership required to address the multifaceted problems bedeviling the nation.

Atiku who was apparently referring to APC’s inability to convene its Board of Trustees (BOT) National Executive Committee (NEC) meetings in line with the party’s constitution spoke during the second Inter-Party Advisory Council (IPAC) of Nigeria annual conference 2017 on Internal party democracy: A recipe to a sustainable democracy in Nigeria, in Abuja.

Atiku who openly drew the attention of Shuaibu to the issue in the APC said the absence of internal democracy within political parties was partly responsible for the difficulty to hold those entrusted with the leadership of the country to render account of their stewardship to the citizenry.

He reiterated the need to reconsider the Electoral Reform Committee headed by Justice Mohammed Lawal Uwais to further strengthen the independence of INEC and ensure that votes count, and encourage parties to field popular candidates in elections.

He further stated that such reform will encourage parties to allow internal democracy to pave way for members to have the freedom to choose and express their opinions, thereby diminishing the role of godfathers and executive intrusion in the affairs of parties and elections in the country.

According to him: “In my view, there is a close relationship between democracy within political parties and democracy within the nation. Put simply you cannot give what you don’t have. You cannot build democracy on a substructure of dictatorship and intolerance. A political party that constricts the freedom of its members cannot really offer freedom to the citizens of the nation. Democracy is not just an idea; is a cultural practice.

“For a number of years now we have had political parties, even governing ones, which hardly hold meetings of their important organs, including those meant for the democratic selection of their leadership, or even constitute institutions prescribed in their Constitution.

“In the absence of those meetings and elections, their existing leadership, often under the direction of the executive at the state or federal level, fill the void. That’s not party building but party bullying. And it’s certainly not a way to democratize parties and aggregate their members’ opinions, interests and aspirations.

“The selection of leaders in a democracy is a serious business because so many other things ride on it. Whenever we get it wrong the nation or a part thereof suffers. We must strive to get it right most of the time. And it is the voters who should freely make that determination.”

Effort to reach the spokesperson of the party, Malam Bolaji Abdullahi on phone to react failed to yield results, as he did not pick the call put to him. Nevertheless, a chieftain of the party and Director General of the Voice of Nigeria (VON), Mr. Osita Okechukwu said he did not expect such issue to be raised in the public domain.

Okechukwu said he expected Atiku to approach the top echelon of the party like the President Muhammadu Buhari, the Senate President Bukola Saraki and Speaker of the House of Representatives Yakubu Dogara to resolve the issue of internal democracy in the APC.
“Even if he is leaving the party, should he destroy the party? I have great respect for him.” He added.And from Bayelsa State, the crisis rocking the APC got messier as two opposing gladiators submitted two lists of delegates to the national body of the party.

The two lists emerged from factions loyal to the former governor, Timipre Sylva and the embattled Chairman of the party, Tiwei Orunimigha.Both factions are reported to have forwarded their list of delegates to the National Executive Committee of the party for review and acceptance.Sylva’s list captured three delegates each from the eight Local Government and other statutory delegates‎ with the exclusion of Chief Tiwei Orunimigha faction.

Previous Alaka Abayomi: Controversy Over Whereabout Of Alhaji Arrested For Badoo Killings
Next “They Stripped My House Bare”: Jonathan Confirms Theft At His Abuja Residence