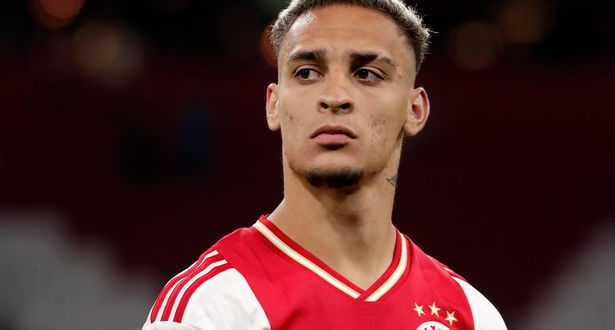 Antony has been spotted entering Manchester United ‘s training ground for the first time ahead of his £84million blockbuster transfer.

The 22-year-old winger will undergo a medical on Monday evening after the Red Devils struck an eye-watering agreement with Ajax. Antony is set to reunite with Erik ten Hag at Old Trafford, the man who brought him to Amsterdam in 2020 before coaching him during two impressive campaigns for both player and manager.

Having gone public with his desire to leave the Netherlands on Friday after holding crunch talks with Ajax chiefs, Mirror Football exclusively reported that the Brazilian had gone on strike at his current club in a bid to force through a transfer. Now Antony is on the verge of getting his wish and signing for United, with a video from @alleplgoals on Twitter showing him walking through the main doors at the club’s Carrington training complex.

Expected to complete his medical with no fuss, it’s just a matter of time before Antony is announced as a Red Devil. The move comes about after a bombshell interview with the Guardian in which the Brazil international opened up on his situation and attempts to engineer a more amicable departure from Ajax.

“Since February of this year, my agents came to Amsterdam to inform Ajax of my desire to leave the club to face new challenge and that some interested clubs would arrive and with them, certainly a great offer,” Antony explained. “During the window months, meetings continued and I also received a proposal from Ajax for contract renewal. I made it clear once again: I want to leave.

“I was very happy in Amsterdam, I won titles at Ajax, made friends and built part of my career, but now I reinforce that I am ready and full of motivation to follow my story and my dreams. People need to listen to me and understand that my motivation moves me towards happiness.”

Richard Keys is surprised by Arsenal’s joy at beating Fulham

Ten Hag is certainly pleased to have Antony quite literally through the door after confirming that United would work right until the summer transfer window slams shut at 11pm on Thursday – the same night which the Red Devils travel to face Leicester City in the Premier League.

“We stick to the plan and if there are good players available we will strike because we want to strengthen the squad always,” Ten Hag declared his after Southampton 1-0 on Saturday to make it back-to-back wins. “So we will be alert until the last second of the window.”

While an announcement is imminent, Antony isn’t expected to feature in Thursday’s match. The Sao Paulo youth product needs to obtain a UK work permit before he can be officially registered as a United player.