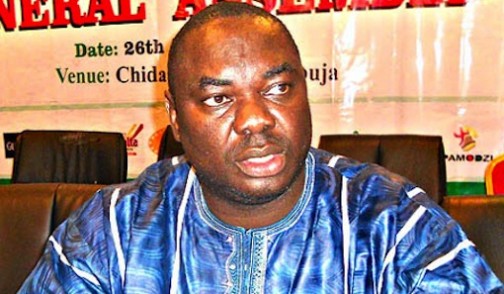 For anti football activities: NFF may ban Giwa, Baribote, others

The Nigeria Football Federation (NFF) said on Wednesday that members of the Chris Giwa-led board of the NFF would face disciplinary action for anti football activities.

A communique issued at the end of the NFF extraordinary meeting held in Abuja on Wednesday said that Giwa and his group would be bringing Nigerian football to ridicule and disrepute by their dealings.

It said that Giwa, Yahaya Adama, Muazu Suleyman, Sani Fema and Effiong Johnson would appear in person before the NFF disciplinary committee to defend themselves for contravention of the NFF statutes and other extant football laws.

“They will face the committee for committing acts such as illegally contracting a law firm in South Africa in the name of the NFF and refusing to pay for the services.

“This got to a point where judgment was given against the NFF by a court in South Africa.

“The action violated the statutes, regulations, directives and decisions of FIFA, CAF, WAFU, and NFF.

“For aiding and abetting the above gross misconduct, thus collectively contravening provisions of NFF, WAFU, CAF and FIFA statutes, the General Assembly referred few others to the NFF Committee on Ethics and Fairplay.

“The others are Rumson Baribote, Shehu Adamu, Ben Agary and Jide Fashion, ” the communique said.

It also said that the congress had reversed its earlier decision aimed at barring non-members of the Congress from contesting for positions on the NFF Executive Committee following appeals by major stakeholders.

“The clause adopted at the 71st NFF General Assembly held in Abuja on Dec. 16 2015, was suspended.

“The clause is aimed at ensuring and guaranteeing professionalism in the administration of football but misinterpreted as barring non-members of the congress from contesting for positions on the NFF executive committee.

“It has therefore been suspended pending ratification at the next NFF General Assembly.

“For the avoidance of doubt the congress further affirmed that all eligible and qualified persons under the NFF statutes are eligible to contest elections, ” it added.

The congress expressed confidence in the executive committee of the NFF under the leadership of Amaju Pinnick and unanimously re-affirmed the election of his board members as was done at NFF elective congress in Warri, Delta on Sept. 30, 2014

The congress expressed its gratitude to the Minister of Youth and Sports, Solomon Dalung, Chairman of the Senate Committee on Sports, Sen Obinna Ogba, Senator Samuel Anyawu and Senator Ovie Omo-Agege for their support.