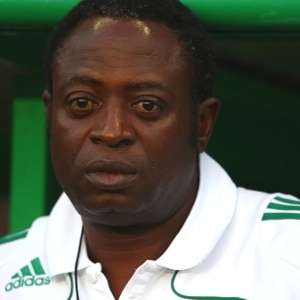 A former Coach of the Super Eagles and current technical director of the National team, Amodu Shuaibu is dead.He died in Benin City early Saturday morning.

He was said to have complained of chest pain on Friday evening and rushed to the Central Hospital in Benin City where he eventually died.

His death is coming less than a week after the death of another former coach of the Super Eagles, Stephen Okechukwu Keshi.

Coach Shuaibu was among the first set of people to pay condolence visit to Keshi’s house in Benin City.

Amodu has managed a number of club sides in Nigeria, such as BCC Lions, El-Kanemi Warriors, and Shooting Stars; he also managed Orlando Pirates in South Africa.

He first managed the Nigerian national team from April 2001 to February 2002.[2] Amodu later stated that his dismissal was “unfair”,[3] and also said that, a month later, he had yet to receive a formal letter confirming his dismissal.

He was re-appointed manager in April 2008.[5] In December 2009 the Nigeria Football Federation stated that Amodu was under pressure, and in January 2010 there was speculation about his future.[7] He was sacked in February 2010.

Amodu was appointed technical director of Nigeria’s national teams in May 2013.

He was re-appointed Nigeria manager in October 2014, replacing Stephen Keshi.[10] It was his fifth spell in charge of the country.[11]Keshi returned to the role two weeks later but was fired in July 2015 and Amodu took over the Eagles again temporarily.[12][13] He was replaced by Sunday Oliseh on a permanent basis later that month.