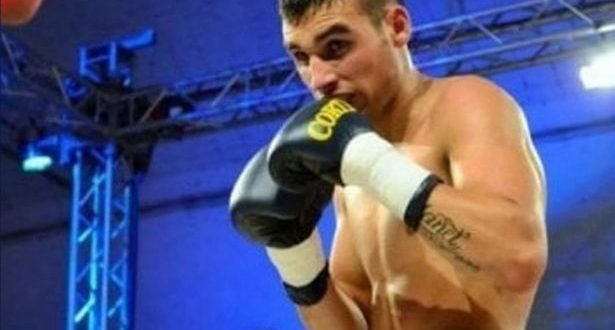 Another boxer dies from injuries sustained during a fight

Santillan drew with Eduardo Javier Abreu over 10 rounds in San Nicolas in his homeland before he collapsed as he raised his arms in celebration at the final bell.

He was held up by one of his trainers as the result was announced but fell to the canvas and was given oxygen before being taken to hospital.

Santillan, a former South American super-featherweight champion, was operated on after developing a clot on his brain.

He suffered kidney failure and was in a coma, although it was heart failure which was registered as the cause of death when he passed away in the early hours of Thursday morning.

The WBC said: ‘[Hugo] passed away from injuries suffered during Saturday’s fight which ended in a draw. ‘We join Hugo’s family and friends in grief, support and wish prompt resignation.’

The super-lightweight (19-6-2) is the second boxer this week to die from fight injuries after the tragic death of Russian Maxim Dadashev on Tuesday.

Kalle Sauerland, a promoter, has led tributes to Santillan, acknowledging a tragic week for boxing.

‘A sad, sad week for boxing,’ Sauerland said. ‘We are devastated to hear that 23 year old Hugo Santillan has passed away following a bout this weekend in his native Argentina. RIP.’

He passed away from injuries suffered during Saturday’s fight which ended in a draw.

We join Hugo’s family and friends in grief, support and wish prompt resignation.

Charles Igbinidu is a Public Relations practitioner in Lagos, Nigeria
@https://twitter.com/ionigeria
Previous Up to 150 people   feared drowned in shipwreck off Libya – UNHCR
Next Boko Haram kill 65 in Funeral Attack near Maiduguri