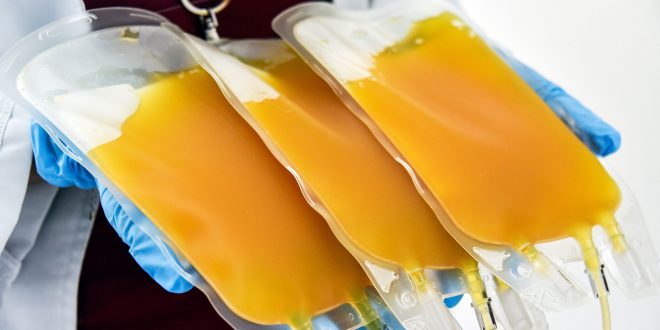 Fury erupted today in different countries of the world over the controversial decision by the US to approve treating Covid-19 patients using the blood of coronavirus survivors.

U.S President Donald Trump called it a ‘very big day’ at a White House briefing yesterday, adding that the approval was a ‘truly historic’ moment. He also claimed that the treatment was proven to reduce the chance of death from coronavirus by more than one third.

But some scientists have criticised US officials for making the ‘bad conclusion’ because the therapy has not been put through the most rigorous human trials, meaning there is no conclusive proof that the treatment works.

British researchers leading a major trial into promising therapies — which found that dexamethasone can cut the risk of death in critically-ill coronavirus patients — said the move was ‘ripping up good science that protects patients’.

The FDA said more than 70,000 patients had already been treated with convalescent plasma, which sees infected patients given the antibody-rich blood of survivors in an attempt to boost their immune response and fight the disease.

It comes just days after top US experts, namely Dr Anthony Fauci and Dr Francis Collins, reportedly stepped in to pause the authorisation of convalescent plasma because the evidence was not strong enough to do so.

Trump lashed out at the FDA at the weekend and accused the agency of attempting to delay the approval of Covid-19 therapeutics until after the president election in November.

The new FDA authorisation means those who had coronavirus and recovered can now donate their blood to be used as a treatment for those currently suffering from the disease.

The FDA approves emergency use authorisations during public health emergencies to speed along unapproved therapeutics to treat or prevent serious diseases where there are no other adequate and available alternatives.

For instance, on May 1, the FDA authorised the emergency use of Gilead Science’s experimental antiviral remdesivir to treat patients.

‘Today I’m pleased to make a truly historic announcement in our battle against the China virus that will save countless lives,’ Trump said last night as he was flanked by Secretary of Health and Human Services Alex Azar and FDA Commissioner Stephen Hahn.

The president also claimed the treatment has proven to reduce the chance of death from coronavirus by more than one third.

Mr Azar said: ‘I just want to emphasise this point because I don’t want you to gloss over this number. We dream in drug development of something like a 35 per cent mortality reduction.’

Trump claimed that over 100,000 Americans have already enrolled to receive this treatment.

‘Based on the science and the data, the FDA has made the independent determination that the treatment is safe and very effective,’ Trump assured.

He highlighted that he was not the one pushing for the approval.

The study assessed  35,000 patients given convalescent plasma, including a high number who were critically ill.

But the study compared patients who had received the treatment with each other. It looked at mortality rates between patients given high or low doses of antibodies, and between those treated early and later.

This is different to a randomised placebo controlled study — when an experimental drug or therapy is compared with a placebo or alternative medicine to see if it truly offers better survival rates.

Randomised trials are deemed the gold standard for testing if a therapy truly works because they eliminate any bias.

The findings were published on a pre-print server, MedRxiv, on August 12. Because they are not in a medical journal, they have not been scrutinised by other scientists yet, which helps to flag flaws.

Dr Eric Feigl-Ding, an epidemiologist from Harvard, pointed out the 35 per cent reduction in mortality was not between the experiment group and control group.

Reacting to the news of the FDA’s authorisation on Twitter, he said: ‘What the hell. This is a bad convalescent plasma conclusion — it was not a randomized trial. Trump doesn’t care, but FDA head should know better!’

There are two randomised control trials of convalescent plasma therapy ongoing in the UK — the REMAP-CAP trial is seeing if it will help patients in intensive care, while the RECOVERY trial is looking at hospitalised patients.

Martin Landray, a professor of medicine and epidemiology at the University of Oxford, who is leading the RECOVERY trial, did not welcome the FDA’s authorisation.

He wrote on Twitter: ‘Convalescent plasma for COVID-19. It may work. We hope it will work. But nobody knows if it does. That’s why we are studying it in the #RECOVERYtrial. Then we’ll know & wont have to guess.’

‘This is not “cutting red tape” it’s ripping up good science that protects patients.’

But Professor Lawrence Young, a virologist from University of Warwick, was pleased with the developments.

He told MailOnline: ‘The FDA emergency use authorisation for convalescent plasma to treat Covid-19 is great news.

‘I’ve been a strong advocate for this approach since the beginning of the outbreak and, with other colleagues, petitioned the government to investigate its use.

‘Convalescent plasma therapy has been used to the prevention and treatment of many infectious diseases for more than a century. Over the past 20 years this approach has been successfully used in the treatment of SARS, MERS and 2009 H1N1 pandemic flu with good safety profile and efficacy.

‘I hope the UK trial reports soon and we can begin using convalescent plasma routinely to treat patients with Covid-19.’

Stephen Evans, a professor of pharmacoepidemiology at the London School of Hygiene and Tropical Medicine, said randomised trials are better for proving efficacy than the study done by the Mayo Clinic.

He said: ‘This study from the Mayo Clinic is indicative of efficacy of convalescent plasma, but as the authors make clear, it is only a suggestion. It does seem to suggest that there are no major issues of safety.

‘The study only looks at those who had received convalescent plasma (CoPl) and there was no control group for a comparison. The randomised trials underway at the moment will give much better answers on efficacy.

‘Mortality was not dramatically reduced to close to zero, so it is not a “cure”; but probably, (not yet certainly) it is a useful addition to the range of treatments that will be effective in early Covid-19 disease.’

‘However, the research is not conclusive and cannot be easily correlated to our work or other trials,’ he said.

‘The combined data in the American study required used plasma from many sources, a great variety of different clinical situations and uses different testing methods to other studies. The results are also observational and not the fair comparison we would see using randomised control trial.’

Professor Roberts is one of the lead investigators for convalescent plasma trials being conducted within the NHS.

NHSBT urged British survivors to donate plasma, saying the US findings ‘support the need for people to donate’ their blood.

A spokesperson for NHSBT said: ‘The observational studies coming from America are promising and support the need for people to continue to donate convalescent plasma in England. However, they are not conclusive.

‘Randomised control trials are the gold standard for determining the effectiveness of a new treatment. The UK is leading the world in setting up randomised controlled trials for Covid-19 convalescent plasma.

‘We need people who have recovered from COVID-19 to offer to donate convalescent plasma at nhsbt.nhs.uk.’

The FDA authorisation comes just days after it was reportedly put on hold due to a lack of evidence.

The FDA was planning to release an emergency use authorisation at the start of August but put it on pause after leading US officials said the evidence was not strong enough to do so at the time, Fox News reported.

Dr Anthony Fauci, the nation’s top infectious disease expert, and Dr Francis Collins, director of the National Institutes of Health, reportedly urged FDA officials to ‘hold off’, according to a report.

They said the pre-print study lacked strong enough data to justify an emergency use authorisation.

The FDA revoked its authorisation of the emergency use of the two drugs to treat coronavirus patients on June 15, citing the fact that clinical trials showed the drugs had ‘no benefit for decreasing the likelihood of death or speeding recovery’.

Trump has spent the past few months pushing the use of anti-malarial drugs hydroxychloroquine and chloroquine for the treatment of coronavirus.

On Saturday, Trump dredged up a tweet about the FDA revoking the authorisation from two and a half weeks ago and wrote: ‘Many doctors and studies disagree with this!’

He did not provide any examples of doctors or studies to back up his statement.

Earlier on Saturday, Trump also accused ‘The deep state, or whoever’ at the FDA of holding up testing for coronavirus vaccines and therapeutics.

‘The deep state, or whoever, over at the FDA is making it very difficult for drug companies to get people in order to test the vaccines and therapeutics,’ Trump tweeted.

‘Obviously, they are hoping to delay the answer until after November 3rd. Must focus on speed, and saving lives!’

Charles Igbinidu is a Public Relations practitioner in Lagos, Nigeria
@https://twitter.com/ionigeria
Previous  Lagos health commissioner Abayomi contracts COVID-19
Next British air hostess freed from Dubai prison after being arrested while on a date