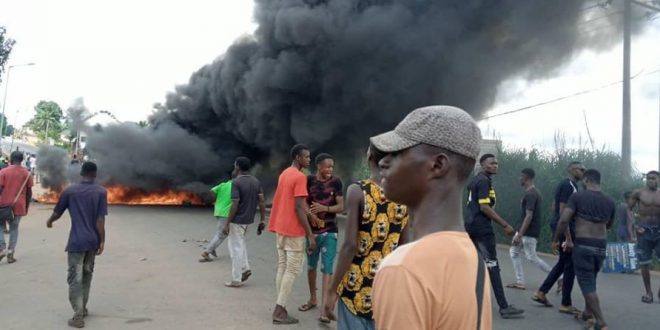 Youths of Enugwu-Ukwu community in Anambra state this morning staged a protest over the alleged killing of a young man, 22-year old Anthony Okafor popularly known as Junior.

The youths claimed that Junior was allegedly killed by security operatives for flouting the nationwide curfew around 8:15pm on Wednesday, May 20th. They blocked the Enugwu-Ukwu axis of Old Enugu – Onitsha Expressway in protest.

However, in a chat with LIB, the spokesperson of the state police command, SP Haruna Mohammed, denied the allegation that Junior was killed by security operatives. According to him, the deceased died in an accident that occurred during the rush hour to beat the curfew.

”The fact of the matter is that there was an accident during the curfew hour around 8.30pm. As a result of the accident, some victims sustained injuries while one person was confirmed dead.

The youths thought that police were the ones who caused the incident and this morning they went on rampage, trying to burn the police station but the Commissioner of Police dispatched a combined team and they went there and were able to disperse the youths.” he said

Haruna said some youth leaders of the community will meet with the Commissioner later today. Meanwhile the body of the young man has been deposited in the morgue.

Charles Igbinidu is a Public Relations practitioner in Lagos, Nigeria
@https://twitter.com/ionigeria
Previous Nigerian woman who has sickle cell anaemia and 2 other chronic illnesses speaks after surviving COVID-19
Next We have reduced the number of tests conducted on persons infected with Coronavirus before they are discharged – NCDC DG, Chikwe Ihekweazu