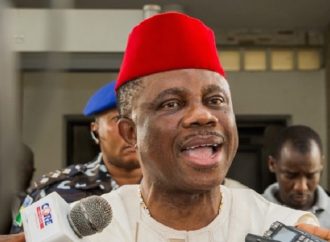 Anambra State governor, Willie Obiano, has vowed to deal with IPOB members and any other group of persons  that may want to cause confusion during the state’s November 18th governorship election.

IPOB leader, Nnamdi Kanu had earlier vowed that there would be no election in the state unless the Federal government conducts a referendum for Biafra.

Reacting to Kanu’s statement, Obiano who was at the function in the state yesterday, said,

“Whoever that says there will be no election in the state and the South East in general is not carrying  the interest  of the people at heart and wants the thing that happened during the last census in which our people were not counted to happen again. We will not allow what happen during the last census where our people were not counted to repeat itself. Due to MASSOB activities, our people were not counted and it affected the entire South east adversely. It will not happen again. We are still suffering it today because we were counted less than what we are. “People are free to vote the candidates of their choice. You can see that in Anambra state today, people now sleep with their two eyes closed. We are not against our brothers in IPOB and MASSOB who are agitating for Biafra restoration, but they must apply caution and ensure that whatever they are doing are within the law. Election must hold in Anambra State and South East at the appointed time, nobody can stop elections in any part of South East”.

Previous R Kelly’s Women Aren’t In Captivity, They Just Enjoy So Much Luxury, They Refuse To Leave His Home
Next Pep Guardiola Confirms Kelechi Iheanacho’s Exit From Man City As The Nigerian Striker Is Set To Join Leicester City For £25m