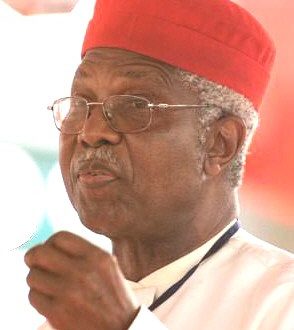 The endorsement of Obaze’s candidature by the elder statesman has laid to rest speculations in the media of the endorsement of the second term bid of the incumbent governor, Chief Willie Obiano.

Addressing PDP faithful in his family house at Oko, Orumba North Local Government Area of the state, Ekwueme said time had come to unseat the ruling All Progressives Grand Alliance (APGA) to pave way for a PDP government in the state.

He noted that Anambra had been a PDP state, regretting that APGA was able to steer the affairs of the state for 12 years as a result of the protracted crisis in PDP.

“Anambra State is a PDP state from inception; we shall henceforth continue with PDP. Time has come for us to take away power from APGA,” he said.

Ekwueme, whose first daughter, Chidi Onyemelukwe, is the running mate to Obaze in the governorship race, insisted that the November 18 poll would bring to an end, the fame of APGA in the state.

On his part, Obaze described Ekwueme’s endorsement of his candidacy and that of his daughter as “eloquent testimony of his position in the party.”

He said the choice of his daughter as running mate was to compensate him for the enormous job he did in the transformation of Igboland.