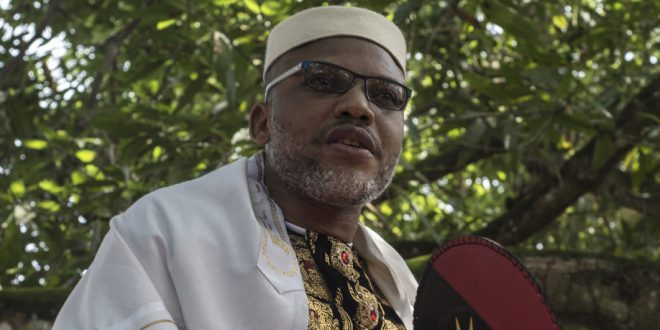 The council of chiefs in Nri community in Aniocha Local Government Area of Anambra has threatened to institute legal action against the leader of Indigenous People of Biafra (IPOB), Nnamdi Kanu, for allegedly committing a taboo in their community.

The Personal Assistant to the monarch of Nri community, Eze Obidiegwu Onyesoh, Ifeanyi Onyesoh, who spoke to journalists in the community today, said Kanu along with his wife and supporters stormed the community on July 19th without prior information to the monarch. Onyesoh said on July 18th, some persons said to be supporters of Nnamdi Kano visited the monarch to verbally inform them that Kanu was coming for a visit. He said he was the one that received them and he told them to go back and return with a written letter seeking for an appointment.

Onyesoh said the monarch was surprised to hear the next day that Kanu had arrived the town and paid a visit to one Mr. Shadarack Mbanefo who is a subject to the monarch.

“I was the person that received them and so I told them to go and come back with a written letter so that they will get an official reply from the palace since the delegation looked unusual, in that there was no titled person among them. At this point, they all left and what we saw the next day was Kanu visiting Nri community with a huge crowd of his supporters. He (Kanu) went straight to the house of one Chief Shadrack Mbanefo, a subject to the traditional ruler of Nri. The feelers we later got, was that the said Mbanefo claimed he handed over the `Offo Nri ’, (symbol of royalty) to Kanu, and even allowed Kanu to visit the historic “Ohianwehi forest” revered as “forest of life” by Igbo tradition. This forest is believed to be the place the first burnt offering was offered by the Jewish Igbo ancestors when they migrated from Israel more than 2,000 years ago,’’ he said

Onyesoh said Nri people considered Kanu’s conduct as a taboo because no high profile visitor entered the community without first visiting the traditional ruler let alone a sacred place without the knowledge of the monarch. He said Kanu and his supporters later found their way to the entrance of the palace and tried to force it open.

“It was this unruly conduct that made the traditional ruler to telephone the security agents who responded promptly and dispersed Kanu and his supporters. It is a taboo in Nri and equally against the Anambra State Traditional Rulers’ Council Law for a high profile visitor to visit a community without first paying homage to the traditional ruler. The people of Nri and her traditional ruler are not against Nnamdi Kanu and his agitation/aspiration but what we cannot take is for Kanu to come and mess up the Nri culture and tradition under whatever motive. The community will drag him to customary court to ensure that nobody else gives such insult to the community and its heritage’’ he said

Previous Video: Nigerian Lady In Austria Appeals To Her Ex-boyfriend To “release Her” From The Spiritual Bondage He Put Her
Next FFK Calls Okorocha: “Scum, Ritualist, Filthy, Pig, Cultist, 419er, Sodomite”