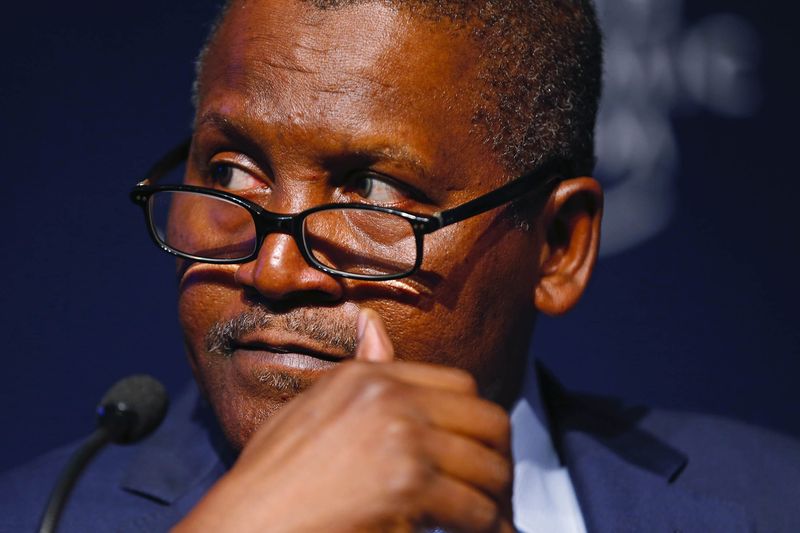 Nigerian billionaire Aliko Dangote’s fortune has fallen by 35 percent this year — representing a loss of $5.4 billion — on the back of a commodities slump and a devaluation of the naira in June. The cement mogul’s net worth is $9.9 billion, a 62 percent drop since January 2014, according to the Bloomberg Billionaires Index. Africa’s second-wealthiest person, South African Christo Wiese, trails Dangote by $2.8 billion with his fortune climbing 12 percent this year on the index.

Dangote’s fortune fell $3.7 billion, knocking him to No. 71 on the Bloomberg ranking, down from No. 46 on Friday. The majority of Dangote’s $12.7 billion fortune is derived from a 91 percent stake in Dangote Cement Plc, which shed 2 percent in trading Monday

Dangote’s slide came as equity markets worldwide surged on hopes that British voters would choose to remain in the European Union. The upswing lifted the collective net worth of the 400 billionaires on the index by $44 billion to $3.99 trillion. Amancio Ortega, Europe’s richest person, French luxury billionaire Bernard Arnault and Amazon.com founder Jeff Bezos led with respective daily gains of $2 billion, $1.4 billion and $1.1 billion.

After Dangote, the second-biggest drop belonged to U.S. casino billionaire Sheldon Adelson, whose Las Vegas Sands fell 5.6 percent along with other gambling stocks after reports that revenue was trending downward. Adelson, who lost $1.1 billion Monday, is the world’s 29th-richest person with $23.3 billion.