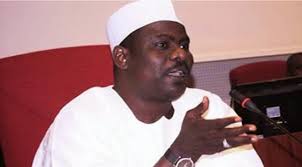 The Senate on Tuesday, received a letter from APC Caucus removing Senator Ali Ndume as its Leader.

Senator Ali Ndume is the senator representing Borno South in the Senate. Senator Ahmed Lawan was however announced as the new caucus Leader

His removal may not be unconnected with the indictment of the Secretary to the Government of the Federation, Babachir Lawal, and the rejection of Ibrahim Magu as EFCC Chairman by the Senate.

Senator Ndume had claimed the Senate neither rejected nor indicted the officials, prompting a counter reaction by the Senate’s spokesperson, Aliyu Abdullahi.