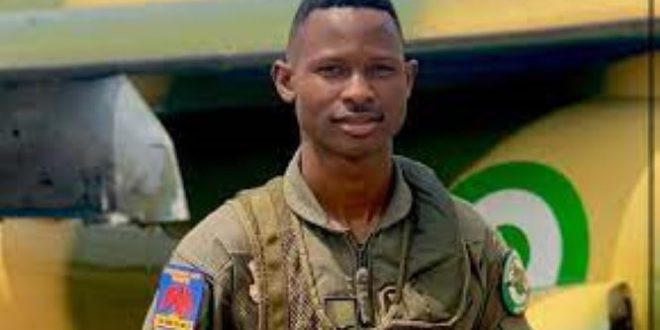 Spread the love
A notorious terror kingpin operating around the Dansadau axis of the vast Kuyambana Forest, Ali Kachalla, was the one responsible for the recent shooting down of a Nigeria Air Force (NAF) Alpha Jet, according to Daily Trust.
When the military jet was downed through the use of heavy artillery power on June 18, no details were available about the incident from both official and unofficial sources and nothing much came out since then.

While the action was expectedly attributed to bandits, the catchword for the armed criminals controlling large swathes of rural Zamfara, Niger, Kaduna, Katsina, Sokoto and Kebbi States, it was unclear who among the several kingpins straddling the area were responsible for downing the aircraft.

But talking to locals, security personnel and other persons with the understanding of happenings in the areas troubled by rural banditry, Daily Trust gathered that Ali Kachalla, a shrewd terrorist with hideout in Kuyambana was the mastermind of the monumental operation.

Kachalla, originally a chieftaincy title in the Kanuri language, is widely used as an honorific for bandits’ leaders in the North-West.

The fighter jet was brought down by men of Kachalla’s gang near Kabaru village, located some 15 km west of Dansadau town.

Spokesperson for the NAF, Edward Gabkwet, in a statement released at the time said the aircraft was attacked while returning from an air interdiction mission between the boundaries of Zamfara and Kaduna States.

While nothing was heard or seen of the ill-fated aircraft, the Air Force released pictures of the pilot, Flight Lieutenant Abayomi Dairo, who successfully ejected from the aircraft.

Daily Trust later exclusively reported how Dairo ran for his life and was saved by locals who ferried him to Dansadau from where he was evacuated by an Air Force helicopter.

Shooting down the NAF jet might be Kachalla’s most daring exploit yet, but for residents in the troubled Dansadau district, his name has been on their lips especially in recent times. He has carried out series of brutal attacks on communities in the district and is known to take special interest in ambushing military personnel.

Those who know him said he was born in Madada, a hamlet near Dansadau to a family of herders. He is said to be in his early 30s.

Kachalla’s current base is located along the bank of a river called River Goron Dutse, which is about 25 km south of Dansadau town, one source familiar with the area, told Daily Trust.

Goron Dutse River is situated across the Kaduna – Zamfara boundary, with parts of it in Kaduna State and the other part in Zamfara State.

“His settlement consisting of several strings of thatched huts is on Birnin Gwari side of the river. But, his large herd of cattle being manned by his heavily armed boys is based in Zamfara State,” a source in the area who craved for anonymity told one of our reporters.

“As I’m talking to you his boys can be found in Dandalla, Madada and Gobirawa Kwacha communities. The villages are all situated southeast of Dansadau town. They are all being controlled by the armed men,” the source explained.

Kachalla’s men are described as “fearless fighters” and have been laying ambush for security operatives for quite a long time. His boys said to outnumber most of those in other gangs in the area.

In recent times, Kachalla has stepped up attacks on Dansadau town to protest the blocking of supplies to him from the town and the villagers’ help in the escape of the military pilot who he wanted to capture alive. In one of the attacks, his men set an Armoured Personnel Carrier ablaze, after chasing security forces deployed to the town.

“Dansadau community has drawn the ire of Kachalla and his boys after local traders were blocked from selling food to him,” one source said. “There are some unscrupulous elements among the local traders who still take bread, soft drinks and other groceries to the bandits in the forest.”

The residents of the community recently protested against the business transactions and blocked every move by the traders to deal with the bandits.

The death of Buharin Daji and rise of Ali Kachalla

When the notorious bandit, Buharin Daji, was killed by fellow outlaws in March 2018, a few of his lieutenants rose from his shadows to pick up the gauntlet. Among the Buharin Daji associates who would rise to notoriety were his assailant, Dogo Gide and Ali Kachalla.

Sources said though the two are good friends, they keep separate gangs with Gide marauding through the forests from one place to another while Kachalla remains sedentary on the edge of Zamfara.

Aside from benefitting from members of the old Buharin Daji group, Kachalla also cultivated his men, breaking the barrier into non-Fulani communities.

“There are many youths of Hausa extraction who have gone to join his group, including many residents of Dansadau town; they are with him in the forest,” our source disclosed.

While Kachalla may appear invincible, he is said to have suffered losses a few times in the hands of security forces and in at least one clash with a renowned Ansaru leader in the North-West, Mallam Abba, where Kachalla lost about 30 men.

Despite his rise to prominence as a result of the men and arms cache he controls, Ali Kachalla remains a shadowy figure, making it difficult to get any picture or video clip of him.

While some bandits’ leaders are known to interact with locals and even visit markets in some areas, Kachalla and most key bandits operating around Kuyambana stay away from any form of direct interaction with the outside world.

“He is a very tough person, a hardliner,” one villager said. “I have met his uncle, Kachalla Sale. The latter had been to Gusau and even Kaduna on peace dialogues but Ali (Kachalla) did not attend any of those sittings.

“This is not to say only Kachalla and his boys are operating in Dansadau district. There are other bandits’ leaders like Dogo Gide, Sani Mochoko, Sani Buta, Danmakaranta, Damina and the rest,” one source said, but multiple sources said Kachalla is perhaps the fiercest currently, overshadowing his old friend, Gide.

Action an affront, treat them as terrorists – Expert

Executive Director of Centre for Democracy and Development (CDD), Idayat Hassan, said the downing of the military jet reveals the vulnerability of the military planes and infrastructure in Nigeria.

“The terrorist organised the attack to intimidate and coerce Nigeria to comply with their demands. It was an attack showing they are powerful. But thankfully, the airman escaped; otherwise, there would have been intense publicity for the bandits and diminishing citizens’ trust in the state.”

The CDD executive director, who has researched the insecurity in the northern states, said “It is frightening that the terrorists possess such potent weaponry to bring down a military jet”.

She said the success of the attack could make them more daring to carry out other attacks.

“This attack could also cement Ali Kachalla as a leader of leaders amongst the bandits while giving other bandits the impetus to down more military planes. These terrorist strategies are adaptive; previously, they create bunkers and taught their wards how to dive and protect cows during an airstrike.

“Bringing down a military jet signifies a complete change in strategy and the government must treat them as terrorists. Nigeria must accept that it is facing a non-international armed conflict again in the North West and must go-ahead to prosecute and deal with these terrorists accordingly. A situation where a group of people can hold Nigeria and her people to ransom is not welcome. Nigeria, at this point, should become more worried about the unification of these terror groups with ISWAP and other jihadi groups” she said.

How he can be tackled – Security analyst

A security analyst, Kabiru Adamu, described the attack as ominous, with implications on local security and international relations, including aviation. He expressed surprise that the military which last year announced that it had knowledge of the bandits amassing military-grade weapons did not take action to avert the use of the weapons on its troops.

On how to tackle Kachalla, Adamu said, “There are three things that are absolutely important. Let me start with intelligence; intelligence is very important as it will tell you what, where, how, when and who.

“All of these will be answered by intelligence operatives and the knowledge will be used in carrying out a precision attack against him. That brings me to the second point, which is precision attack. We have tactical units within all our armed security departments. When the US extracted its citizen that was abducted in Niger and brought him to Sokoto, it was with a tactical unit. So why do we have tactical units and they are unable to perform tactical assignments?”

Adamu canvassed for proper kitting of the tactical squads with specialised weapons, vehicles and other tools to enable them to deliver on their assignment.

“There are a lot of concerns among Nigerians at the moment about the incident and we are comity of nations, no country in the world will hear something like this and it will not affect how they relate with us.”

The security analyst further disclosed that if the gunmen can shoot down a military jet, commercial flights could also be at risk.

“So, there are certain countries that will not like this development, analyse it and probably tell their companies not to take the route and that will have a negative impact on Nigeria.

“There are so many implications on that development, if it is easy for the military to say our jet was shot down, what is important is to say how it was shot down and if they know what weapon was used in shooting it down. It will help a lot to bring down the current tension in the minds of a lot of Nigerians.”