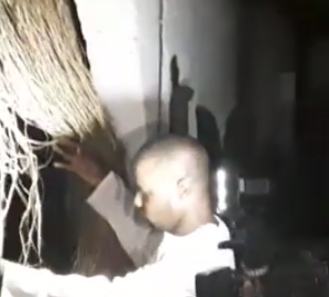 There was a disagreement on Tuesday between the Lagos State Police Command and a 51-year-old resident of Magodo Phase II, Alhaji Alaka Abayomi, who was arrested in connection with Badoo killings in Ikorodu.

While Abayomi told our correspondent that the police lacked evidence and had released him, the command said he was still in custody.

The oil and gas operator was apprehended for his alleged involvement in the attack on a family of five in Oke Ota community, Ibeshe, on Sunday, which led to the death of a couple and two of their children.

The police had said the arrest of Abayomi and two others, whose names were not disclosed, led to the discovery of a Badoo shrine in Agbowa town.

There was, however, a mild drama on Tuesday when our correspondent visited Abayomi’s mansion on PSSDC Road, Magodo Phase II, around 2pm.

His security guard, Usman Zibo, said he had been released by the police and resumed his business activities, adding that he would return home later in the day.

No policeman was seen in the area during the visit.

He said, “I think the matter has been settled. He has been released since morning (Tuesday). He is not around now; you can come back in the evening to see him. I can’t give you his number, but you can drop yours. He will call you when he returns home.

“I have been working with him as a security guard for 10 years and I have never seen any trace of ritual killings. We had lived together in the Agric area, Ikorodu; we moved here three years ago.”

Abayomi, who called our correspondent around 6pm, said the police did not have any evidence against him, adding that he did not write any statement.

The 51-year-old, who spoke in Yoruba, claimed to have inherited the shrine from his forefathers, saying it was being used for healing purposes.

He said, “I am at home now; you can come now. How did people arrive at the name Badoo? Nobody knows those who are perpetrating the attacks. I have been living in Ikorodu for over 30 years and everybody knows me. I am into oil and gas.

“I use the shrine for healing different ailments. I took the police there. They didn’t allow journalists to interview me and they didn’t take my statement. I will sue the police for blackmailing me. Let them bring out any exhibit found in the shrine or in my house. Why did they release me if indeed I have connection with Badoo? They said investigation would continue.”

He said, “He is assisting the police with investigations. Through investigations, we discovered that hoodlums in the area wanted to start protests. And it is possible that the evidence that may be used against him and others may be destroyed at the shrine, his home or place of business.

“We have gone to secure all those things, with the suspect in our custody. We will get back to you on what we have done. The suspect is still in our custody, but was told to go and protect those evidences with investigators.”

A resident of Agbowa, who spoke on condition of anonymity for fear of being attacked, said the shrine was used for ritual purpose.

He said, “The shrine has been there since 2005. It was a hunter that first discovered it and we brought it to the attention of the police. But the police didn’t take it seriously then. A lot of evil activities are perpetrated in the shrine. The police need to carry out thorough investigations.”

Meanwhile, residents of Ibeshe stormed the palace of the Ayangbure of Ikorodu, Oba Kabiru Shotobi, on Tuesday to protest against the killings.

“The attacks happen when there is no power supply. We want security to improve. We don’t want any killing again. The kabiyesi assured us that he would come to Ibeshe to have a meeting with residents. He promised that within one week, things would improve. The protest lasted for about five hours.”

Previous No National Identification Number, No Nigerian Passport By 2018
Next APC Is A Bullying Party, Says Atiku