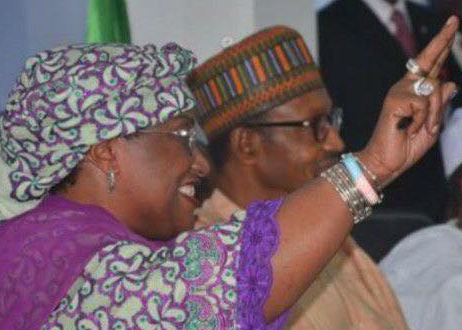 Aisha Alhassan Apologises To APC Over Her Comments About President Buhari, Atiku and 2019

National Publicity Secretary of APC, Bolaji Abdullahi, says the Minister of Women Affairs and Social Development, Aisha Jummai Alhassan, has admitted that her statement that she will not support President Buhari for the 2019 presidential election was uncalled for and was made out of indiscretion and has apologized to the party.

Abdullahi disclosed this to newsmen after members of the National Working Committee met with the Minister at the party secretariat in Abuja yesterday September 14th. According to Abdullahi, Alhassan has accepted her fault and the fact that the timing of her statement was wrong and apologized to the party. Recall that she had an interview with BBC Hausa last week where she stated that come 2019, if President Buhari, her boss and former Vice President Atiku Abubakar, were to contest for president, she would campaign and support Atiku who she claims to be her godfather. She also stated that she doesn’t mind getting sacked for her comments.

Speaking to newsmen after the meeting with the Minister, the APC spokesperson, Abdullahi said: “Since the issue of the comment she made came up, the party has not said anything regardless of what individuals may have told you because we are a party that recognized the right of her members to express their opinions or views. We also had an opportunity to discuss with the minister to understand what she said and in what context she said so before we know how to respond. So, when she came, we asked her to explain to us what truly transpired and in what context she said what she said and she did offer these explanations. Now, having offered her explanations, we acknowledged that as a member of this party, she is entitled to her opinion and she is entitled to her choice. However, as a senior member of this party, her statements represent an act of indiscretion because, with the kind of position she occupies even within the party, she is a party leader in her own right, what she said was not what she was supposed to say at the time that she said it. She ought to have exercised greater judgement than she did and she acknowledged that yes, maybe she ought not to have. Maybe the timing was wrong and she apologised that if she had put the party in any difficult position, she apologised. I want you to take note of the fact that nobody is questioning her right to take the position she has taken. We have not come out to say, ‘why are you saying you are supporting this person?’ She has a right to her choice and to support whoever she wants to support. Afterall, she is not saying she supports a member of another party. But what we are saying is that with the position she occupies, she ought to have exercised greater sense of discretion and better judgment knowing that making that kind of statement would definitely create some other situations for the party, if not for the government”.

When asked whether the party offered her an option to resign since she doesn’t believe in the political aspiration of her boss, Abdullahi said “That did not come up. What we just said was that we understand the context in which she said what she said, but it was an act of indiscretion for someone occupying the position she is occupying in the party to make that kind of statement. If this was 2018 and the people have filed their applications to say they are contesting and she now comes out and says she is supporting this person, how can that be an issue? But we are still in 2017. We are still far away. Atiku has not said he is contesting. He has not collected any form. He has not announced to anybody that he is contesting. So, that is what we mean by the timing. It is not that she had no right to say what she had said”.

Alhassan refused to speak with newsmen after the meeting.

Previous No Igbo Person Is In Support Of IPOB Agitation For Biafra – Okorocha
Next Don’t Address Nigerian Senators As ‘Distinguished’, They Have No Honour- Itse Sagay