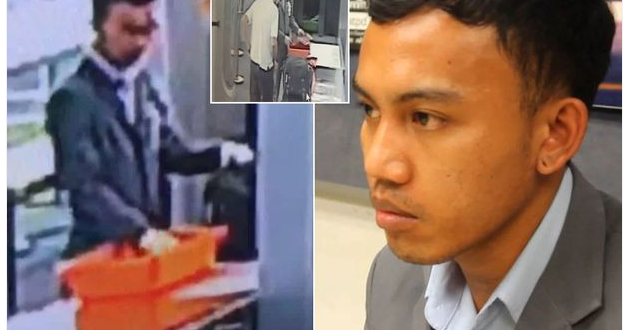 An airport security officer was caught on camera stealing a bundle of cash from an 89-year-old US tourist. The security guard was filmed slipping the notes from a red tray just before it is about to be scanned and quickly pocketing them.

In the video the frail holidaymaker- walking with a bad back – is seen emptying his pockets into the containers at Suvarnabhumi Airport in Bangkok, Thailand on Tuesday night.

And just seconds after the man walks through the X-ray machine, the guard, suspected to be 25-year-old Thanat Rattana, starts flipping through the man’s wallet. 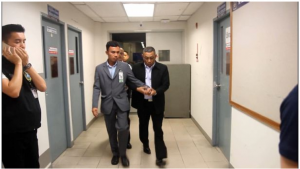 He carefully removes the notes, lays them in the tray, then while the pensioner is being patted down he slips 6,000 baht (£137) into his pocket.

The sneaky official even waits until another passenger is at his side – wrongly believing that they would obscure the theft from the airport’s surveillance cameras.

Police pounced on Thanat and claim they caught him with the notes in his pocket.

Thanat told police he needed money to return to his home town and was broke because of the cost of traveling to work every day, officers say.

He also claimed to be disabled, and blamed that for his stealing.

Officers charged the worker with theft and he was detained in custody at the airport’s holding cells.

Airport boss Kittipong Kittikajorn said: “The first thing we did was to call the management of this security company to acknowledge the incident.

“They must find more qualified employees to work. The security measures set by the airport are already international standards. “The stolen property was quickly returned to the passenger before he boarded his plane.” 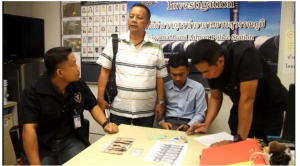