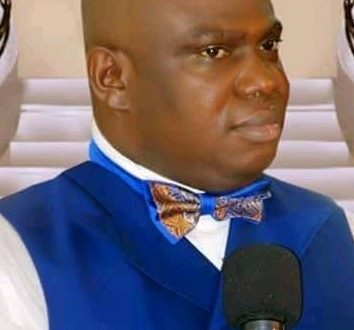 Founder of Omega Power Ministry (OPM) Worldwide, Apostle Chibuzor Chinyere, has revealed the secret behind his success after working as an airport cleaner, security man and a recharge card vendor.

Apostle Chinyere recounted how he started life as a young man about 15 years ago in Lagos, selling mobile phone recharge cards and cleaning toilets at the Murtala Muhammad Airport, Lagos.

He told the News Agency of Nigeria (NAN) that his existence had been destined and guided by God.

The 45-year old pastor said the experience of neglect, rejection and poverty changed his perception of life and catapulted him to where he had found himself today.

“I was motivated to doing the right thing because 12 years ago, I was a homeless man, I had nothing; I was selling MTN recharge card in Lagos. I am always pained seeing the poor people suffering.

“The first time I travelled to Lagos, I slept under the bridge. I later became a cleaner at the Murtala Muhammed Airport (MMA), where I also cleaned the airport toilets.

“Go to MMA Lagos and ask of Chibuzor, everybody knows me there as a cleaner; it is not a secret. I posted the picture on the church Facebook wall.

“At times, when I am travelling or coming back from my journey, I stop at the airport to greet my former colleagues, and I gladly share what I have with them.

“In fact, I had to establish one of them and he is now doing well in Port Harcourt,” Apostle Chibuzor said.

According to the pastor, his major concern in life having tasted poverty, is to see the children of the poor get quality education no matter the circumstance.

This, he said, led to the establishment of the OPM free schools in Bayelsa, Rivers and Abia as well as a Foundation for Humanitarian Services.

He told NAN that he used the offering and tithes from church members in 150 branches across the globe to ameliorate the sufferings of the poor people and the less privileged in the society.

“We started this free school when we had only one branch of the church about 10 years ago; we also operate a free restaurant, where Muslims and Christians go to eat.

“The free school is located in Bayelsa, Rivers and Abia, and we want to spread it all over Nigeria.

“The OPM Foundation is also behind the construction of free estates where people live without paying a kobo as rent; we have skill acquisition centres where people come and learn different skill.

“We rehabilitate both militants and armed robbers and feed them every day. We also rehabilitate commercial sex workers and also give them accommodation and we are also feeding them.

“They are now doing legitimate businesses,” he said.

The foundation’s other achievements include empowerment, alms-giving and commissioning of a free Computer Training Centre at Elele prison in Rivers.

Others are the award of university scholarship to the poor apart from the free nursery, primary and secondary schools education.

It has also commissioned free tailoring centre and provided water borehole to the people of Rumuji and other communities in Rivers, to alleviate the problem of water scarcity in the Area.