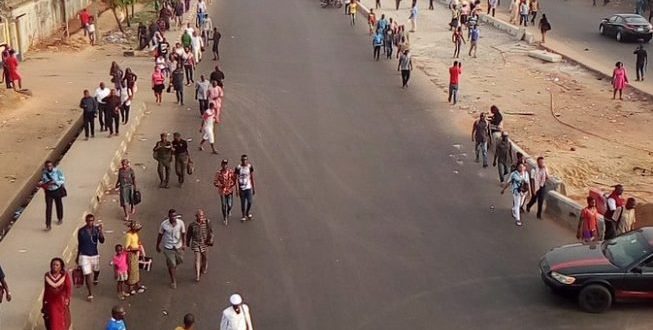 Many residents of Lagos are groaning as a result of the vehicular restriction on major roads in the state, compounding the traffic gridlock in the metropolitan city.

The roads were blocked because of President Muhammadu Buhari’s two-day visit to the state.

As part of measures to control the traffic situation, the Lagos state government declared Thursday a work-free day.

It also announced that roads leading to some of the projects the president would inaugurate would be shut.

The projects are the Lekki Deep Sea, Eko Atlantic City, Ikeja Bus Terminus, among others.

But residents who woke up as early as 4am where still trapped as commercial buses and other unauthorised vehicles were restricted from plying the Agege Motor Road, Airport Road, Mobolaji Bank-Anthony Way, Eko Hotel Round about and different spots in the city.

Banners and billboards with the president’s photographs were also put up along the roads, while many of his supporters lined across the roads.

Most of the passengers trekked long distance before getting to the airport.

Some airlines had to delay their flights to enable passengers meet up. In a statement, Air Peace said the traffic diversion was affecting its operation. The airline also empathized with its passengers.

“We empathise with our esteemed guests who are having a challenge accessing the airport to catch their flights due to the diversion of traffic at various points In Lagos,” the statement read.

“This is currently affecting flights out of our base in Lagos despite the availability and readiness of our crew to operate their flights.

“We urge our valued guests to remain calm, while we monitor the development and take steps to minimise the impact of the resulting flight disruptions.”

Kehinde Adebowale, a Lagos resident told newsmen that she trekked a distance of two kilometers on her way to work on Thursday.

“I trekked from Ile-Zik after Cement Bus Stop to Alausa (a journey of three kilometres). I have not done such since I started working five years ago,” she said.

“No matter the excuse given, it’s not fair for us to be treated like this because of one man. Just one man.”

Ayebo Olubunmi, another resident, lamented the effect of the closure of major roads on people during Easter period.

“I am supposed to go to church in Yaba but I am trapped in Egbeda just because Mr President is inaugurating some projects. Is he greater than God?” she asked.

“How on earth could they have disrupted our plans because of a man who is supposed to be serving us? I do not have words to describe how I feel over this callous act.”

In his reaction, Adewale Martins, Catholic archbishop of Lagos, described the president’s visit as ill-timed.

In a statement signed by Gabriel Osu, director of social communications, the archbishop lamented that the president’s visit coincided with the “most important days of the year for Christians when they celebrate the events of the salvation of the world”.

He said Christians would be subjected to “untold hardships” due to the closure of roads and the ban of commercial motorcycles on many routes.

“It is really unfortunate that the timing of the visit would create such hardships for people and deprive some of their right to worship and take part in the most important feast of their faith,” he said.

Buhari is currently attending the 10th colloquium of Bola Tinubu, a leader of the APC, in Lagos.

This is the president’s first official visit to the state since his emergence in 2015.