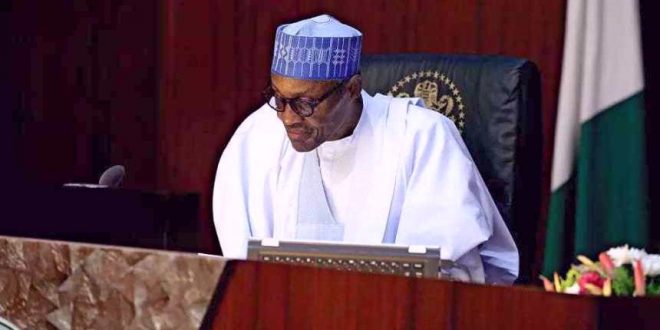 ‘Age is telling on me. Working now for 6, 7, 8 hours a day in the office is no joke’, Buhari confesses

PRESIDENT Muhammadu Buhari has said that he looks forward to his exit from office as age is telling on him from working long hours every day.

The president said many of his colleagues were enjoying their retirement and that he hoped to emulate them in the next 17 months when his tenure ends.

Asked how he felt clocking 79 years recently, he said: “Yes, I think COVID-19 has come to my rescue in the sense that the amount of people that needed to see you has reduced.

“And about my age, yes, I see my colleagues, they are now resting and I assure you that I’m looking forward to the next 17 months when I too would have to be less busy.

“Questions of executive council memos from as many states as possible to be considered virtually every week.

“So, really it is a lot of hard work. But I asked for it and I cannot complain.”

I don’t expect appreciation from Nigerians’

President Buhari also said that he does not expect Nigerians to appreciate him when he leaves office, but only for them to realise that he has done his best.

On his eagerness to handover power, he said: “Yes, because, look, as you know I have been a governor.

“I have been a minister and I’m in my second term as President. So, I have gone through the system. And really, what else can I do with this country?

“I have given my best and I hope after I leave Nigerians will reflect and at least not show appreciation.

“I’m not expecting any appreciation. But what I’m expecting is for Nigerians to say yes, this man has done his best.

“This is the most I’m expecting from Nigerians.  But it’s no joke. I’m telling you.

“Look at the problem we’re having in the South-East now. How many police stations were taken over, weapons missing?

“So, the main problem is, I hope I will leave  a more secure Nigeria than what it is now.”

Charles Igbinidu is a Public Relations practitioner in Lagos, Nigeria
@https://twitter.com/ionigeria
Previous Aguero could return to Manchester City, offered an ambassadorial role
Next My mum not bothered about hellfire memes on social media – Mummy GO’s son