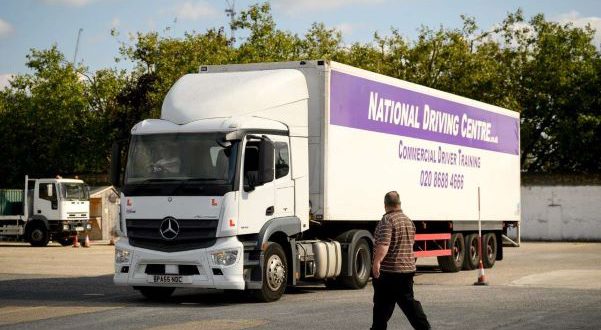 After Brexit, thousands of foreign truckers went home. Now, Britain wants them back.

“You have to remember that drivers spend most of their time on their own. They always remember when someone did something wrong to them,” one trucker said.

LONDON — Faced with dry gas stations and bare grocery shelves, the British government is offering 5,000 temporary visas for foreign truck drivers to prevent a looming crisis ahead of Christmas.

But despite this potentially lucrative offer, many truckers who left the country after it exited the European Union say they have no plans to help solve a problem stoked in part by the consequences of Brexit.

Artur Jarzebski says he will not work in the United Kingdom because he no longer feels welcome in post-Brexit Britain.

“English society decided that the Polish people are not worth enough to stay in the U.K.,” said Jarzebski, 42, a Polish trucker who spent a decade toiling long hours on British highways. “After Brexit, Polish drivers feel unwanted by the U.K. market.”

The U.K. is facing the same supply chain problems as the U.S. and Europe. Older truckers are retiring and youngsters, perhaps reassessing their lives amid the Covid-19 pandemic, don’t want to work the long hours or return to life on the road, which is lonely and not conducive to social relationships.

The virus made things worse, delaying tests for new drivers and making it more difficult to haul goods from one country to the next. But the U.K. is being squeezed by another factor: Brexit.

After the vote, an estimated 20,000 truckers went back to Europe and never returned.

The U.K. is currently around 100,000 truck drivers short, according to industry officials. In recent days, that’s translated into winding lines outside gas stations because there aren’t enough licensed drivers to deliver fuel from refineries. The issue has been compounded by panic-buying.

Some supermarket shelves are also empty, with a shortage of workers in the food processing sector, also partly down to Covid and the Brexit exodus, beginning to bite.

In a sign of how bad things are, the British government will deploy the military to drive gas tankers “in the next couple of days,” Business Secretary Kwasi Kwarteng told reporters Wednesday.

The government is also trying to fast-track driver training. And it is offering the 5,000 temporary visas for the three months until Dec. 24, as well as 5,500 visas for poultry workers.

For the critics of Brexit, there is a certain irony to all this. The vote to leave the E.U. was motivated in part by a desire to curb immigration and stop as many foreign workers as possible from competing for British jobs. Now the U.K. is in trouble, and it wants foreign workers to save it.

The demand has seen trucker wages spike. But many European drivers say the upheaval of moving to another country outside the E.U. for three months is not worth it. Others are unhappy that only now is their crucial role in the supply chain being acknowledged after being taken for granted for decades.

As well as the sense that Brexit exposed Britain’s unwelcoming side, some drivers are also scarred by the memory of what happened last Christmas: More than 6,000 trucks stuck outside the English port of Dover after France closed its border to try to contain Covid’s Kent variant.

Thousands of drivers were forced to sleep in their cabs Christmas Day.

“I have friends from Lithuania and Czech Republic, and what they told me is there is no point in coming just to work on a three-month visa,” said Mateusz Ozimek, 31, a trucker who was born in Kraków, Poland, and now lives in London. “The money is quite decent but the way they treated us last Christmas will not be forgotten.”

“You have to remember that drivers spend most of their time on their own. They always remember when someone did something wrong to them,” he added.

Though many industry figures and experts say Brexit has exacerbated the crisis, most agree it is only one cause among several.

In the U.S., the number of people working in the trucking industry also nosedived when the pandemic hit, according to the Bureau of Labor Statistics. This has since recovered, but the workforce is still around 26,000 workers short of its pre-pandemic levels.

The same is true in Europe. Britain may struggle to fill its 5,000 temporary visas with European drivers because the reality is that there are shortages across the continent too, according to Benoit Lefere, a spokesperson for UPTR, a Belgian logistics union.

“Brexit has meant that the U.K. has been confronted with this problem now — but Europe will face the same problem, just a few years down the line,” he said. “Perhaps by then, the U.K. will have found a solution.”