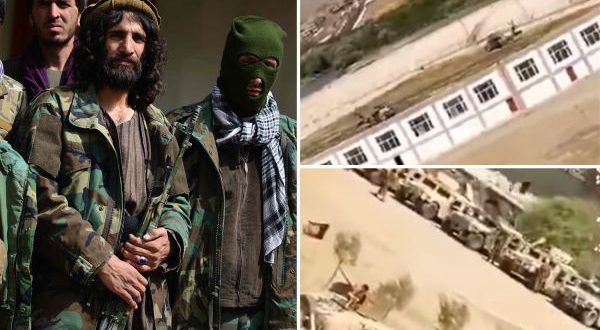 RESISTANCE fighters have reportedly killed dozens of Taliban militants as the Islamists launched an assault on their mountain fortress.

Heavy fighting has been reported to have broken out along the fringes of the Panjshir Valley – the last region holding out against the extremist group.

Amir Khan Muttaqi, a senior Taliban official, this morning said talks with the resistance have collapsed – but continued to call for their surrender so they can join the “Islamic Emirate”.

Casualties have been reported on both sides, but the Taliban are reported to have potentially lost dozens of fighters in a series of assaults on the seemingly impenetrable fortress.

The valley, an area just 80 miles north of Kabul, is regarded as a natural stronghold which has never been conquered due its mountainous sides and narrow roads – fending off the Soviets in the 80s and the Taliban in the 90s.

The narrow valley is still littered with the remnants of armoured vehicles – echoes of the unsuccessful attacks launched by the Russians.

Thousands of anti-Taliban fighters have gathered in the 1,400 square mile bastion – and have become known as the “Lions of Panjshir“.
They are one of the final pockets of organised resistance since the Taliban steamrolled to power after the US withdrawal.

And they have raised the flag of the Northern Alliance – a group of freedom fighters who fought back against the Taliban when they first ruled the country from 1996 to 2001.

Fears are growing the Taliban could launch a major offensive using their new arsenal of US-made weapons – including armoured vehicles, assault weapons and helicopters.

But the resistance fighters themselves are also said to have stockpiled a large arsenal as they feared the day would come when they would have to take up arms in Panjshir.

We feared this day would come

Videos and pictures show military vehicles and helicopters stored in a football stadium, with other pictures show machine gun nests built around the valley awaiting the Taliban.

Fahim Fetrat, a politician linked to the North Alliance, told France24: “I can’t talk about the military specifics for obvious reasons, but I can assure you that we have what it takes to hold out for a long time.

“We still have a large stockpile of weapons from the war against Soviet occupation, and the first wave of resistance against the Taliban in the 1990s, because we feared this day would come.”

Afghan soldiers, police officers and commandos – some trained by Western forces such as the SAS – are all reported to have flocked to Panjshir Valley for a final stand against the Taliban.

These forces also reportedly brought with them any weapons and vehicles they could save from the Taliban’s lightening offensive following the muddled withdrawal of the US.

“Thousands of mujahideen from the Panjshir region, as well as Afghan soldiers, special forces and police officers, have come to Panjshir after their towns were captured by the Taliban. They came with weapons and ammunition,” said Fetrat.

He added: “There are people here from all parts of Afghanistan: from Jalalabad, from Helmand, everywhere from the north to the south of the country.

“That’s why we call this a national resistance because all Afghans in Afghanistan are involved in this struggle, not just Tajiks and Panjshir.”

Reports state Taliban fighters have been attempting to cut supply lines, electricity and internet connections to the region.

Fetrat however insists they are well-provisioned and ready to fight – assuring they can hold out against the Taliban for as long as it takes.

Speaking today, Taliban official Muttaqi said: “My brothers, we tried our best to solve the Panjshir problem with talks and negotiations… but unfortunately all in vain.

“Now that the talks have failed and Mujahiddin (Taliban) have surrounded Panjshir, there are still people inside that don’t want the problems to be solved peacefully.

“Now it is up to you to talk to them. Those who want to fight, tell them it is enough.”

Bismillah Mohammadi, Afghanistan’s defence minister before the government fell last month, said the Taliban had launched a renewed assault on Panjshir on Tuesday.

“Our people should not worry. They retreated with heavy casualties.”

Residents and fighters in Panjshir, many of whom fought the Taliban when they were last in power from 1996 to 2001, offered a defiant message.

“We are ready to defend it till the last drop of our blood,” said one resident, reports AFP.

“Everyone has a weapon on their shoulder and ready to fire,” another said. “From the youngest to the oldest, they all talk about resistance.”

The Panjshir has immense symbolic value in Afghanistan as the area that has resisted occupation by invaders.

Ahmad Massoud, one of the NRF’s leaders, is the son of the late guerrilla commander Ahmad Shah Massoud, who was dubbed the “Lion of Panjshir” for holding out, first against Soviet and then Taliban forces.

And self proclaimed President of Afghanistan, Amrullah Saleh, who was the vice president before the fall of Kabul, is also believed to be holding out in the region.

Many Afghans are terrified of a repeat of the Taliban’s initial rule from 1996 to 2001, which was infamous for their treatment of girls and women, as well as a brutal justice system

Charles Igbinidu is a Public Relations practitioner in Lagos, Nigeria
@https://twitter.com/ionigeria
Previous Manchester City’s Benjamin Mendy REFUSED bail, ‘having meltdown’ in prison after assuming he would be locked in VIP wing
Next Buhari give reasons for sacking two Ministers