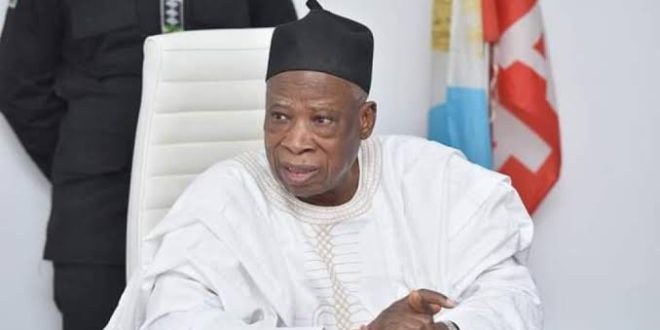 The National Working Committee (NWC) of the All Progressives Congress (APC)  on Thursday met with the party’s presidential candidate for the 2023 poll, Bola Ahmed Tinubu.

The meeting took place at Tinubu’s residence in Abuja.

Tinubu had polled 1,271 votes to emerge the APC candidate at a special convention of the party held at Eagle Square, between Tuesday and Wednesday in Abuja, defeating 13 other contenders to clinch the party’s presidential ticket.

Our correspondent reports that the NWC members were led to Tinubu’s residence by the APC National Chairman, Senator Abdullahi Adamu.

Adamu returned to the party’s headquarters located in the Wuse 2 area of Abuja at 4:48pm.

Details of the meeting could not be immediately ascertained as journalists were not invited to cover the closed-door meeting.

But sources close to some members of the NWC said the APC national officers visited Tinubu to congratulate him on his victory at the convention.

Our correspondent reports that Tinubu, a former governor of Lagos State, is yet to receive his certificate of return from the party.

Charles Igbinidu is a Public Relations practitioner in Lagos, Nigeria
@https://twitter.com/ionigeria
Previous Tinubu Is The Right Candidate To Succeed Me – Buhari
Next INEC Gives Atiku, Tinubu, Obi, others One Week To Present Running Mates