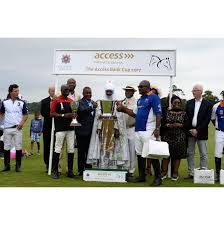 The annual event is part of its continued support of UNICEF and the climax to the high-profile Access Bank/UNICEF Charity Shield Polo tournament, celebrating a decade of commitment to UNICEF projects and aimed at reaching out to and highlighting the plight of vulnerable children and orphans and internationally displaced persons.

From its’ base with 5th Chukker in Kaduna, Nigeria, the Access Bank/UNICEF Charity Shield  has grown to be the biggest charity polo tournament in Africa and generates interest and support from organisations and individuals across Africa for the UNICEF/Access initiative.

From its’ base with 5th Chukker in Kaduna, Nigeria, the Access Bank/UNICEF Charity Shield has grown to be the biggest charity polo tournament in Africa

Since the UNICEF/Access Bank initiative was started in 2007 it has seen the rebuilding of two schools in Kaduna and more than 8,000 students sustained in continuous education, at the same time developing new school blocks and a computer literacy building all in a more secure and friendly school environment. The communities surrounding the schools are being supported with bore-holes for water, and sewing and grinding machines to secure employment and stimulate economic and social development.

Access Bank PLC group managing director and chairman of The Access Bank UK Ltd, Herbert Wigwe explained the reasons behind the Bank’s continued support for the Fifth Chukker UNICEF initiative. “We are conscious of our role as a change agent in Nigeria that can help institute socio-economic development through responsible business practice and environmental considerations,” he said. “In addition, we are continually seeking ways through which more resources can be pooled towards supporting the children. We are part of the community and as such should support its wellbeing.”

The UK event which is the culmination of the tournament was organised by The Access Bank UK Limited which has just published its Annual Report for the year ended December 31, 2016. This shows impressive growth indicators including a growth in assets of 81% to £1.1bn, operating income of 27% to £25million, with profit before tax up 45% to£12.5million. Commenting on this success The Access Bank UK’s Chief Executive Officer and Managing Director Jamie Simmonds said:

“Our objective is to grow a sustainable business through customer service excellence, and innovative solutions in trade finance, commercial banking, private banking and asset management.” The Award as Best Africa Trade Finance Bank, for the second year running, as voted by CFI-Co readers and contributors is testimony to the value of our principles of relationship-based banking, growing our business through the depth and quality of customer relationships, while at the same time maintaining a moderate appetite for risk. “Our achievements owe a great deal to the strong partnership that we have with our parent company, as evidenced by our joint support of the Access Bank Day at the Guards Polo Club in Windsor.”