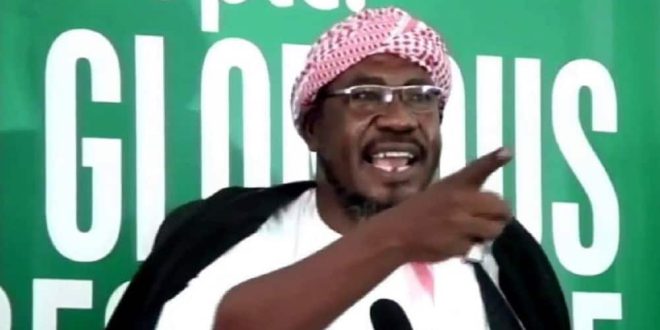 It would be recalled that Sheikh Khalid was suspended after delivering a sermon on insecurity, on Friday.

n the sermon, the Sheik flayed the government over its failure to tame the escalating insecurity and killings in the country.

The imam hinted at some measures that the electorate should devise should the authorities fail to protect lives.

He had said, “Nigerian masses should resort to only one term which is – protect our lives, we will come out to vote; let us be killed, we will not come out to vote, since it’s only elections that you people know,” he said.

“I am informing you that you have been suspended from leading prayers in the Apo Legislative Quarters Mosque from today being April 2nd, 2022 until further notice.”

“The decision was taken out of the inciting Friday sermon you delivered on April 1st, 2022; where you advised people

The Imam later said he was not given fair hearing, adding that he only read about his suspension.

But in a letter dated April 4, 2022, the mosque committee told Imam Khalid that he had been relived of his duties at the mosque.

“We regret to inform you that from today the 4th day of April 2023 you have been disengaged from the services of the above-mentioned mosque. This action is occasioned by the non-remorseful attitude you exhibited following your suspension on 2nd April this year.”

“Akamakallah, you know better than me by the teaching of Islam, the essence of administering punishment is to correct behavior. Unfortunately, your media reaction to the suspension creates the impression that you are not remorseful, NOT to talk of humbly reflecting on the consequences of your utterances. Leadership demands a great sense of responsibility. If our words do more harm than good to the larger interest of the country or the public. We have a responsibility to maximum restraint for the good of the public. It is obvious, however, that you don’t seem keen to modify your Friday sermon to be reflective of the vitality of the security situation in the country.

“You are an influencer; your words carry a lot of weight, your words can make or mar our situation. Your words can be taken advantage of by mischief makers, those responsible for these security challenges, or enemies of the country for their devilish agendas. As leaders of the mosque, we have a sacred responsibility to avoid utterances that are capable of making a bad situation worse. This is our fear and concern.”