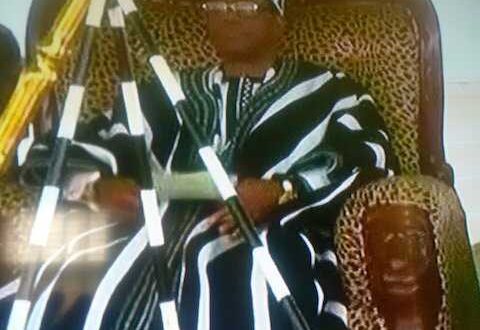 A man on Saturday at the JS Tarka Stadium Gboko did the strange and abominable when he sat on the stool  prepared for the coronation of the 5th Tor Tiv, Prof. James Ayatse.

The man identified as Sam Nyitse had outsmarted security men at the Gboko Stadium, to sit  on the stool

Sam Nyitse told his interrogators that he was prompted by God to cleanse the stool for the new king.

” I sat on the stool in order to cleanse it and make it comfortable for the incoming Tor Tiv, ” he said.

Retired Brig.-Gen. Atom Kpera, the Chairman, Central Planning Committee for the coronation, who was present at the scene, ordered security men to punish Nyitse.

Officials, however, said they would investigate Nyitse’s motive.

Some dignitaries at the scene described his action as “strange and abominable.”

Meanwhile security men blocked all the roads leading to Gboko stadium. Dignitaries are being conveyed to the venue in buses.