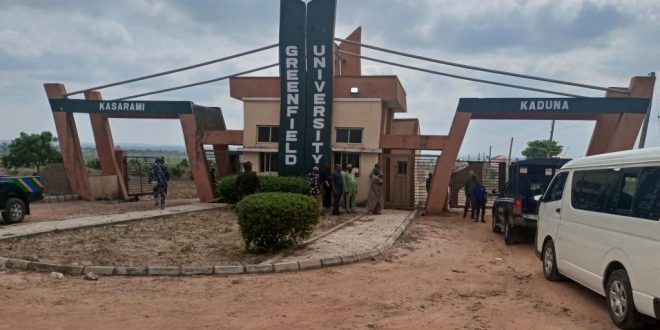 The criminals behind the abduction of 23 Greenfield University students and staff have threatened to kill the remaining students of the Kaduna-based institution in their captivity if by Tuesday government fails to pay the ransom they had earlier demanded.

In an interview with the Hausa Service of the Voice of America, the bandits behind the April 20 abductions also said they recently killed five of their victims to show the government’s failure.

The bandits had made a demand of ₦800 million after abducting the students, but three days after their demands were not met, they killed three students before murdering an additional two a few days later.

A leader of the bandit group who identified himself as Sani Idris Jalingo, in an interview with the VOA, said if the Kaduna State Government or the families of the abducted students fail to pay a ransom of ₦100 million as well as provide them with 10 brand new Honda motorcycles by Tuesday, the remaining students will be murdered.

Jalingo, who said the families of the students have already paid N55 million to them, claimed that they had used the money to feed the students.

“We heard the utterances of the Kaduna State governor (Nasir El-Rufai) that he will not pay any ransom to bandits to purchase additional weapons. He also said he informed his family that he will not pay any ransom if any of them gets kidnapped. So, we want to show that the Nigerian government has failed and that is why we killed the students,” he said.

Two of the abducted students who spoke during the interview also appealed to the government and their parents to take the threats seriously.

One of the students identified as a grandchild of the 18th Emir of Zazzau, Shehu Idris, called on the government to negotiate with their captors.

“They mean what they say because they have already killed some of us,” said the student, identified as Idris.

The remains of three of the kidnapped students were discovered on April 23, throwing Kaduna into panic and confusion.

Three days later, two more students were murdered by their abductors, bringing the death toll from the attack to six. A member of the school staff was murdered by the criminals known locally as “bandits” on the night of the abduction.