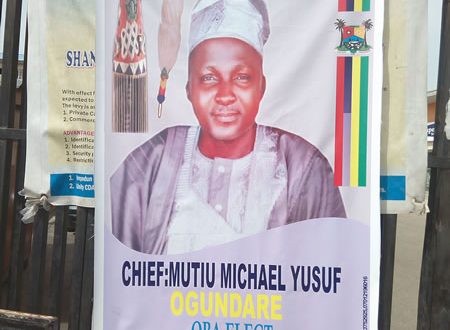 Exactly one week after he was abducted by a three-man gang along the Centre for Management Development (CMD) Road, Ikosi-Isheri Local Council Development Area (LCDA), the Baale of Shangisha in Magodo in Lagos secured his freedom Wednesday.

This is just as the police are trying to crack the mystery behind the abduction and his release given the alleged inconsistencies in the statement by the chief and his brother.

He was reportedly released without any ransom paid days after his abduction given the fact that his abductors had remained incommunicado after they picked him up.

His release has doused the tension in the Shangisha/Magodo area as the youths who were spoiling for war over his abduction, have all downed their tools.

On the day he was kidnapped, the traditional ruler was in the company of his brother, Mohammed Adams, when they were lured out of the palace by some unknown persons who claimed to be potential land buyers.

The buyers had claimed that they wanted to buy some plots of land in Shangisha and had lured him to follow their vehicle to inspect the said land, which he did, not knowing that they had sinister plans.

On getting to Domino’s Pizza Junction, along the CMD Road, Shangisha, the men were said to have diverted the vehicle and threw off the brother from the car before taking the chief away to an unknown destination, while he rushed to the nearby police station to write his statement.

Subsequent attempts to secure his release had proven difficult given that the kidnappers had switched off his phones and made no attempt whatsoever to contact the family.

His family were in despair until he was rescued by the RRS and he put a call to his brother to alert his family of his release.

On his release a senior police source who spoke on anonymity, said he was picked up around Alausa as he was seen walking around aimlessly.

He said: “RRS operatives were on patrol close to Alausa when they saw him walk up to the vehicle to introduce himself and they picked him up.

“He was taken to RRS headquarters where he was debriefed. He was also allowed to call his brother.”

The source said it was the call that set off an alarm with the police operatives on ground, as the brother’s reaction to his release was not satisfactory enough.

He said: “We tried to interview him about his ordeal but there were several inconsistencies. He said he was neither beaten or interrogated neither did they ask him for contacts of the family members.

“He also claimed that while in their captivity they did not blind fold him rather they have him free access to move around. He said he was only blindfolded when they wanted to release him.

“Meanwhile, we are investigating because we are aware of a case involving a land matter in the area, which we think made him stage the incident.”

According to the policeman, they had to send him to the state command anti-kidnapping squad since they were the ones handling the case.