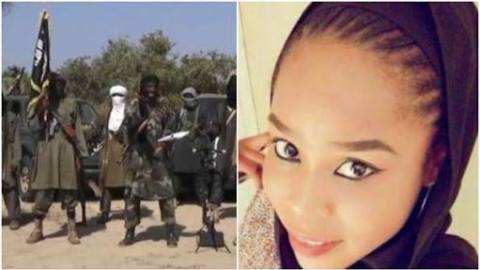 The nurse abducted by Boko Haram in Rann, KalaBalge local government of Borno a fortnight ago has sent a message to her WhatsApp contacts.

In the message, written in Hausa, the 24-year old girl, Hauwa Muhammad Liman called on the recipients who are in her WhatsApp contact list to return to the path of God.

She also called on them to denounce the ways of the infidels, else they will become the “lost”ones.

Translation: ‘O you people of this world, fear God, denounce infidelity.’And if you don’t, Allah will give us victory over you and you will be among the misguided’.

The 24-year old girl had sent an audio message via the same platform when the attack was going on two weeks ago to one of her WhatsApp contacts.

She asked the person to inform her family of the incident.

Writer, Investigative Journalist, and Social Media Strategist
Previous “IGP Wants To Expose Me So I can Be Killed” – Melaye Cries Out
Next Mentally Challenged Woman Wanders Away After Giving Birth To Baby Boy