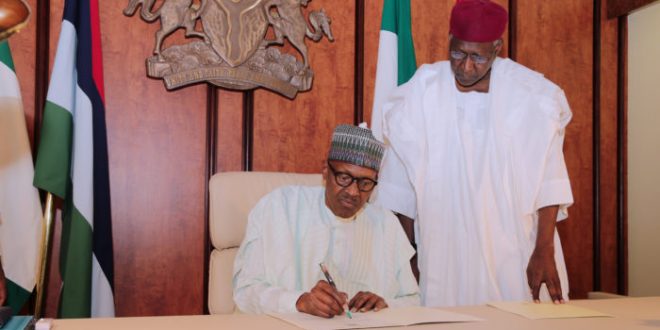 The functions of the Chief of Staff to President Muhammadu Buhari, Mallam Abba Kyari, with respect to ministers has not changed the Presidency says.

Reacting to media criticisms of President Buhari’s directive to ministers to channel all correspondence through the Chief of staff, the Presidency stressed that it was just a verbalisation of the same role performed by Kyari in the first term of President Buhari.

According to a statement issued by Garba Shehu, SSA to the President on Media, the presidency said that Buhari merely pronounced one of the primary functions of the Chief of Staff.

“Recent media and social media reports on the responsibilities of the Chief of Staff to the President have suggested that the role has changed. This is not the case”, Garba said.

“Today, under the Buhari II administration the role of Chief of Staff remains the same as it was under Buhari I.

“It is worth stressing that the role and responsibilities of the Chief of Staff and the method of communication and arranging scheduling between Cabinet members and the President are, in Nigeria, based on the US model, where the same system operates – and has done for decades – in precisely the same way.

“That role is to act as the head of the presidential administration at Aso Rock; to be an adviser to the President on any and all matters; to be the line manager for all staff at Aso Rock; and to manage appointments and scheduling for the President.

“In the traditional presidential system, it is a primary function of a Chief of Staff, which may vary according to the needs and desires of each President, to supervise key State House Staff, control access to the office and the person of the President, manage communications and information flow and this includes that which binds the relationship with the two other arms of government.

“When President Buhari explained to ministers that they would be expected to communicate with him and arrange scheduling to meet with him primarily via the Chief of Staff, he did so as many of the Buhari II Cabinet ministerial appointments are new appointments and cannot therefore be expected to know how matters of liaising with the President operate.

“This is to stress that access to the President is open to ministers. It is not true that this is denied them in the Second Term.

“The Secretary to the Government of the Federation (SGF) on the other hand is responsible for ensuring the effective coordination and monitoring of the implementation of government policies and programmes. All cabinet matters must go through him.

“Under this dispensation, a performance evaluation of ministers and Permanent Secretary will be maintained by the SGF. Two weeks after assuming office, they are expected to sign mandate acceptance documents.

“It is time to end the unnecessary controversy, for the key appointees of the President to carry out their jobs.”

Charles Igbinidu is a Public Relations practitioner in Lagos, Nigeria
@https://twitter.com/ionigeria
Previous ‘On my journey, I fell down a couple times but I never fell off’ – Anthony Joshua says as he shows his physique
Next Melania Trump hits up the G7 Summit in Calvin Klein, Gucci — and silver high heels