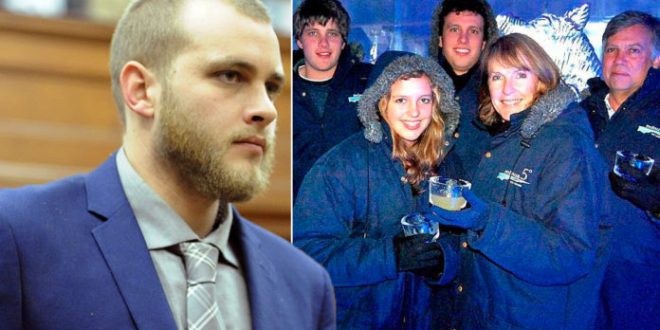 Henri van Breda arrives in the High Court in Cape Town, South Africa, Monday May 21, 2018 to hear the verdict in his case. Van Breda is accused of murdering three members of his family with an ax. (AP Photo/Nasied Manie)

A South African court on Thursday sentenced a 23-year-old man to three life sentences for murdering his parents, Martin and Teresa as well as brother, Rudi with an axe in 2015.

In a case that has gripped the country, Henri Van-Breda also received 15 years in prison for attempting to kill his younger sister, who was gravely injured but survived.

He also received an additional 12 months for defeating the ends of justice, a court in Cape Town ruled.

Van-Breda, who pleaded not guilty, claimed an intruder killed his family members at their luxury estate in the Cape Winelands area of Stellenbosch in 2015.

His sister, who was 16 at the time of the attack and suffers from amnesia, did not testify during the lengthy court case.

“The violence was excessive and gratuitous. It was intended to cause maximum harm.’’

Defence lawyer Pieter Botha, who plans to appeal against the conviction and sentencing, had suggested Van-Breda’s youth and status as a first-time offender should be mitigating factors in the sentencing.

He also said his client could not show remorse because he maintains he is innocent.

Van-Breda is set to appeal the judgment on June 27.

While Judge Desai recalled that a witness heard a loud argument in the Van-Breda home for several hours on the night of the killings.

He told Van-Breda that “we have no explanation for what you did’’ and that he had to be handed the “severest possible penalty”.

Van-Breda also received a one-year sentence for obstructing justice after the court concluded that he inflicted injuries on himself to try to mislead police.

The Van-Breda family lived in Australia for some years before returning to South Africa, and the judge said Van-Breda had enrolled at the University of Melbourne. (dpa/NAN

Charles Igbinidu is a Public Relations practitioner in Lagos, Nigeria
@https://twitter.com/ionigeria
Previous Man Remanded In Police Custody For Enticing A Married Woman
Next “Nigerian Soldiers Raped Us In Camps But We Were Forced To Deny It” – Borno IDPs