Home / News / International News / 79-Yr-Old Man Learns Driving, So He Can Take His Wife To The Hospital 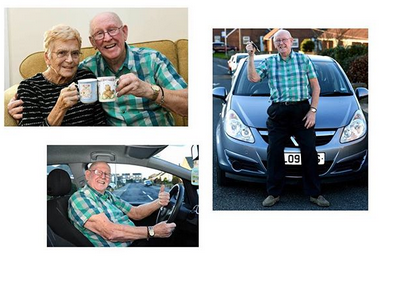 79-Yr-Old Man Learns Driving, So He Can Take His Wife To The Hospital

A 79-year-old husband has learnt to drive, after his “chauffeur” wife was forced to retire from the road following a stroke.
Keith Limbert is now repaying a lifetime of lifts by being able to take wife Anne, 79, to vital hospital appointments and for trips out.

Mr Limbert had driving lessons as a young man in his 20s but never got around to taking his test, meaning childhood sweetheart, Anne, did all the driving during their 58-year long marriage.

But their life was turned-upside down when Mrs Limbert suffered a stroke in October 2015. The illness left Anne unable to drive prompting Mr Limbert to sign-up with a driving school. And now after two failed attempts he can finally tear up his L-plates.

He now takes Mrs Limbert, a former school cleaner, out every day in his automatic Vauxhall Corsa to have a coffee and a scone, either to a garden centre or somewhere they can “watch the world go by”.

His new licence also means he can ferry Mrs Limbert to hospital where she is currently being treated for breast cancer after being diagnosed for a second time 18-months-ago.

He said: “My wife drove me around for 40 years. She has looked after me long enough and I think its about time for me to look after her now. I owe her.” The couple, who met when they were 16, have three children and three grandchildren.