Nigerians have reacted to report of Tinubu’s daughter and Iyaloja-General, Folasade Tinubu-Ojo; and the Chairman of the National Union of Road Transport Workers in Lagos State, Musiliu Akinsanya aka MC Oluomo being part of the 20-member committee that will supervise the recruitment of 20,000 Lagos youths into Federal Government’s Special Public Works Programme.

The 774,000 youths who are to be employed by FG for three months across the country, will receive a monthly payment of N20,000. They will engage in unskilled jobs such as sweeping streets, clearing drainages, controlling traffic and road construction among others.

The appointment has been trailed with mixed reaction and here are some below; 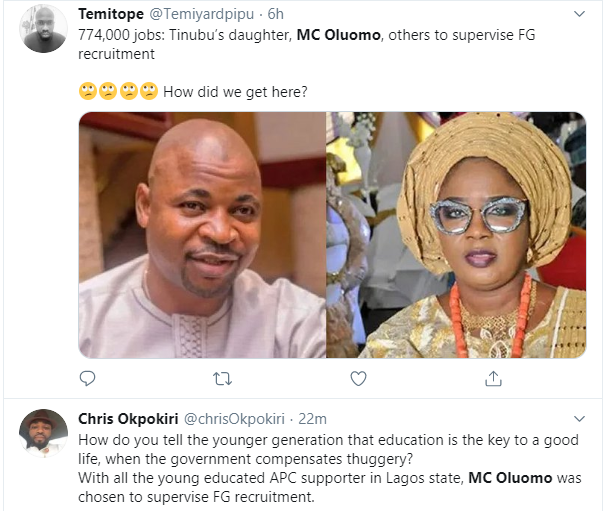 Charles Igbinidu is a Public Relations practitioner in Lagos, Nigeria
@https://twitter.com/ionigeria
Previous I studied law, but didn’t graduate – Suspected fake lawyer confesses after being arrested in Ogun
Next Regina Daniels’ co-wife visits her at the hospital after the birth of her son