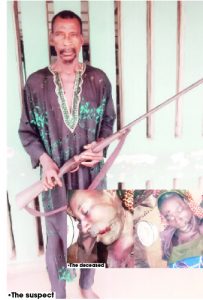 A 65-year-old hunter, Clement Etila Ekele, has been arrested for murder in Kogi State after killing his 45-year-old younger brother, Monday Ekele, who he allegedly mistook for a monkey.

It was gathered that on that fateful day, July 16, at Ikaka village in Ibaji Local Government Area of the state,  the deceased went to the farm about 5.00am. Three hours later, about 8.00am, Clement also went to the farm with his double barrel gun.

According to his statement,  Clement said he saw a monkey on a tree and shot it. The monkey fell down. When he ran to the foot of the tree to pick up the monkey, Clement said that what he saw was the dead body of his brother.

Speaking to The Sun at headquarters of the Kogi State police command, where he has been detained while investigation into the matter is in progress, Clement, said:

“I hunt for monkeys. I have never had any misunderstanding with my younger brother, Monday Ekele.

On that day, he went to the farm before me. Later I also went to the farm with my gun. There, I saw a monkey on the tree. I shot the monkey but when I wanted to carry the dead monkey, it changed into my younger brother. I didn’t know what came over me; I couldn’t understand myself. I ran back to the village and I started drinking beer and rejoicing.

Later, I told my friend Anthony that I shot my younger brother dead.”

“The gods I worship failed me because I refused to perform certain sacrificial rites. They became angry with me; I have been a hunter for years, I never shot anybody. Why must I kill my own brother? We live together, our houses are opposite each other. I have been having misunderstanding with the people in my community. They only envy me.”

One of the villagers Ali Ibrahim, who spoke to Sunday Sun said that the suspect, Clement, believed so much in charms and had been terrorizing the villagers with his prowess in diabolic practice.

“When we heard that he shot his brother, Monday, who was the chairman of the vigilance group. Before this incident happened, he would always threaten to deal with anybody that crossed his path. He often carried out the threat. So he has been a terror to us. People in our village were so afraid of him, and were under some kind of bondage when he was around. As it is now, we don’t want him to come back to the village again. He has dealt with several of his opponents,” Ibrahim said.

The officer in charge of the Homicide Section, Kogi Police Command, Supol Mohammed Balarabe, disclosed that detectives recovered the dane gun allegedly used by Clement to commit the alleged crime.

Meanwhile, the deceased has been buried while the suspect is awaiting arraignment in court by the police, for murder.

Previous Diezani: EFCC Traces $1.5b To Swiss Bank, Inspects Her N7.1bn Mansions In Dubai
Next “I Fought With Two Presidents Yar’Adua Ended In His Grave, Jonathan In Otueke.”El-Rufai