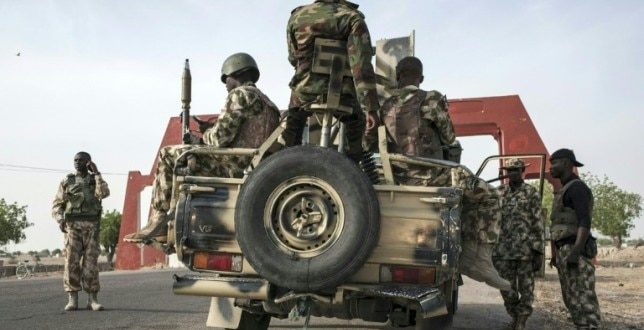 Not fewer than five soldiers were killed by fleeing Boko Haram on Saturday evening at Kanama, headquarters of Yunusari Local Government in Yobe State.

Thirty soldiers are also allegedly missing in the dastardly attack lunched on Nigeria troops at the remote northern town in Yobe State.

The Army have confirmed the attack but however denied having incurred any casualty in the attack.

Credible security and medical sources however told our correspondent that about four to five soldiers were found dead and evacuated to Maiduguri via Damaturu. The source also disclosed that 30 soldiers are still missing in the aftermath of the attack.

Some Kanama residents who also confirmed the death of soldiers said they sighted a military ambulance evacuating victims, but they were chased away by soldiers in an attempt to get closer to the scene.

An eyewitness Modu Lawan informed the media that the insurgents stormed the village with seven hilux vans cladded in full military attire.

“We thought they were soldiers because everything about them was like soldiers, their dressing, their vehicles everything. They passed through the town but did not touch anybody. They went straight to the military base and we started hearing serious gunshots,” Lawan said.

Hon Ali Yerima, the Chairman Yunusari Local Government said he could not confirm any casualty in the attack but was however confident that the insurgents did not attack any civilian in the town.

“The information I got is that the insurgents were loaded in seven hilux trucks. They passed through the town to attack the military base. My sources informed me that no civilian was attack, only the military base was attacked  but I also gathered that the soldiers fought very well to repel their adversaries,” Ali Yerima said.

The chairman also informed that the movement of the insurgents through the town caused panic and fear among residents who ran in different directions for safety of their lives.

An impeccable security source informed that the insurgents are fleeing from the heat in Borno State.

“There has been a serious heat on the insurgents from Borno axis. You notice there was a fighter jet hovering over Borno and Yobe. There is tremendous coordinated ground and air attacks on the insurgents lately so they don’t jeopardize the yultide celebrations,” the source said.

Col. Kayode Ogunsanya, the spokesman for 3 Division Nigeria Army in a short sms said, “Yes there was an attack on own troops 2 days ago  by the Boko  Haram terrorists in Kanama. The attack was repelled and our soldiers are in hot pursuit of the insurgents. Happy New year my broda”