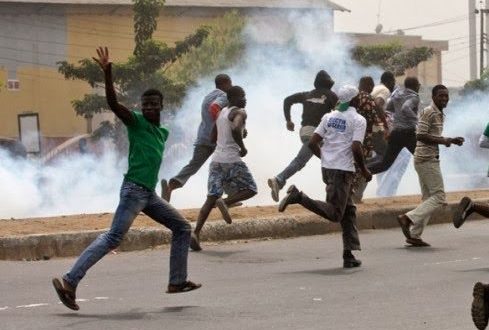 According to eyewitness account, trouble started when Senator Kwankwaso’s convoy while returning from campaign rally passed through an open space where Kofa and his supporters were praying for peaceful conduct of the general elections.

It was gathered that Kwankwaso’s convoy disrupted the ongoing prayer session, which resulted in the bloody clash that reportedly led to the death of five people with many others from both sides were injured.

According to an eyewitness account who pleaded anonymity, “the long motorcade of Senator Kwankwaso which disrupted the prayers was actually the cause of the problem.

“It was, indeed, a bloody sight. The Kwankwaso people had provoked Kofa’s supporters who were conducting a peaceful prayer session for the peaceful conduct of the elections.

“I counted five dead bodies which were moved away on a police Hilux Van. Many vehicles were set ablaze; and buildings around the Kofa neighbourhood were also burnt.”

It was further learnt that both sides were said to have used dangerous weapons, during the bloody clash, which lasted for some hours before Police operatives intervened.

When contacted, the state Commissioner of Police, Mr. Wakili Mohammed said he was yet to be fully briefed on the incident.

“When I am fully briefed, I will call you and give you the full details. For now, I cannot tell you what I don’t know,” he told our correspondent.